Ford announced the all-new Tourneo van range, which is based on a new architecture allowing lower clearance and independent rear suspension for better handling and comfort. The van comes in three options - BEV, PHEV and ICE and obviously we will be focusing o the first two.

The fully electric E-Tourneo Custom comes with a 74 kWh battery, which is estimated to provide 370km of autonomy on a single charge and a total power output of 215 horsepower. It can tow up to 2 tons. 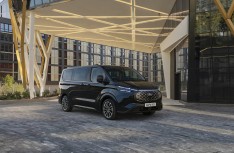 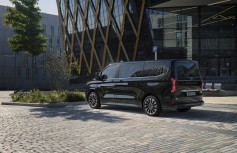 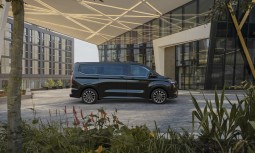 The PHEV option, on the other hand, has an 11.8 kWh battery that can go 50km on its own and is combined with a 2.5-liter gasoline engine.

Ford is offering three trims - Active, which is kind of a rugged-looking, Sport and Titanium X. The latter is the highest tier, of course. The Tourneo is also available in two wheelbase variants, but regardless of the version you choose, the E-Tourneo can take up to eight people, while the other two options have room for one more.

The second and third-row seats are placed on rails so they are adjustable and you can even set up a conference-like layout with passengers facing each other.