EV vs ICE - differences and similarities

Electric drivetrains are a historic shift in the automotive world. It means that many components of an ICE car are no longer relevant for an electric vehicle. Some of the parts have similar and some have different functions. In this article, we try to outline the key differences between ICE and electric cars.

It is obvious that we need an “interpreter” between those two parts. This role is taken over by the power electronics device commonly known as the inverter.

The efficiency of the inverter plays a crucial role in the overall efficiency of the electric vehicle. The power electronics are not the only “interpreter” in an electric vehicle, though. The onboard charger is the second connecting device. It converts the AC 1 or 3 phase from the grid to DC in order to charge the battery. When we use high power DC charging, the onboard charger is bypassed.

Another area that's very different is heating the cabin of the EV - PTC heaters (Positive Temperature Coefficient) and heat pumps. Those devices do not exist in ICE vehicles, which have plenty of wasted thermal energy (because of the low thermal efficiency of their engines) and it is easy to use some of it to heat their cabins.

In electric vehicles though, this is not possible. The high efficiency of the drivetrain means that the thermal energy produced is minimal. That's why different devices are needed to produce the necessary heat for the cabin as well as the battery. 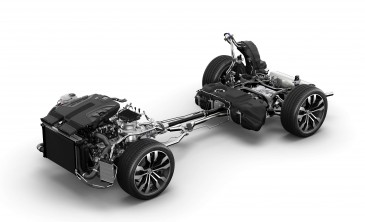 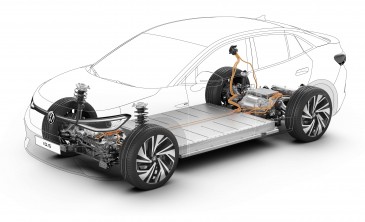 An ICE and an EV

The DC/DC converter is another completely new component. This device is responsible for converting the High Voltage DC from the battery to 12V for the low voltage consumers of the car (lights, infotainment, electric windows, mirrors).

Finally, the charging socket is also a unique component that we encounter in an electric car.

Both types of cars use gearboxes, but it is a lot simpler in an electric car, were with a few notable exceptions) it usually comes with just one speed. In modern passenger ICE cars, 9-speed automatic transmissions are already spreading. The reason this happens is covered in this article.

The philosophy of a braking system differs as well between ICE and electric cars. In most electric vehicles, when the driver pushes the brake pedal, the electric motor serves as a generator that does the initial braking and recharges the battery at the same time - that’s why we call it “regenerative braking”.

If the driver needs more stopping power, there is a threshold after which the conventional hydraulic system brakes the car. In most everyday situations, electric cars don’t use the conventional braking system at all, thus prolonging the service life of the brake pads and discs. In an ICE car though, the hydraulic brakes are used every time the driver pushes the brake pedal.

Another difference between fuel-powered and electric cars is the simplicity of the motor itself. The electric motor mostly needs no maintenance and has only two moving parts. In contrast, the internal combustion engine has many moving parts - an average 4-cylinder engine has at least 40. It needs oil and fuel filters changed regularly, timing chain or belt is vital and needs maintenance, poly-v belts run every auxiliary component - as you know from experience, this list goes on and on.

Everything that has to do with suspension, wheels, and tires, is pretty similar between ICE and electric cars. Starting with suspension, the same architectures are used in both types of cars.

Of course, shock absorbers and springs are adapted in electric cars in order to cope with the extra weight.

The tires are also similar in design between ICE and electric. There are tires for both types of vehicles that deliver low rolling resistance characteristics. The wheels used to be different between ICE and electric cars because of the “aero” design that most electric cars use to reduce aerodynamic drag, but not anymore. Many recent ICE models are equipped with “aero” wheels that reduce turbulent flow around the wheels as well. That seemingly small difference in design affects 1/3 of the total drag in a car.

To wrap things up, most differences between ICE and electric cars come from the fact that the two use totally different kinds of propulsion which require totally different components. If we look past these facts, then we start to see the similarities because after all, they are both cars and many parts remain common despite the different propulsion methods.

This is a good thing because if electric cars were different in every aspect compared to an ICE car, then they would be far more expensive and their wide adoption would be much slower.

So you're driving one of the worst reliable car.

You do not replace a battery every 2-3 years… you replace around 300k km or more. No maintenance fees and low electricity costs.