The Xpeng P7 is an all-electric midsize sedan made by Xpeng Motors, a company that has grown quickly since its estblishment back in 2014 and one that is valued now at $37 billion. The Xpeng P7 is its second model - it was released in 2020 and a small refresh followed in 2021. The car has earned the nickname “China’s Model 3” and we had a chance to drive it and put that claim to a test - let’s see what the fuss is all about. 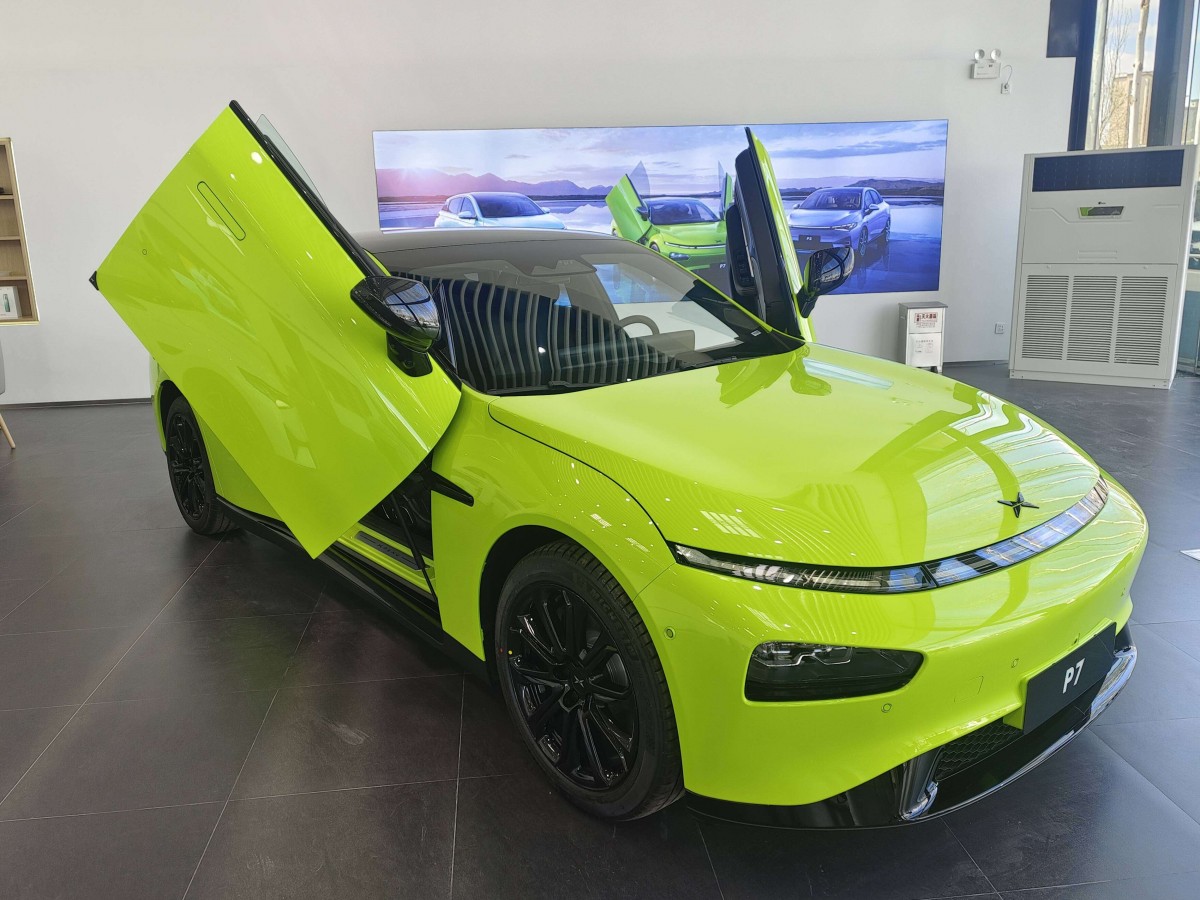 The version we are testing is the 80.9 kWh 4WD Performance and it is the Chinese market model.

Xpeng P7 is 4,880mm long, it is 1,896mm wide and 1,450mm high with a wheelbase of 2,998mm - it makes it larger than Tesla Model 3 and nearly as big as the Model S. In terms of appearance, the P7 at first glance looks very premium, the Tesla Model S and Model 3 similarties being clearly visible. The car rides on 19" wheels as standard and comes with ful length glass roof.

The low-set front face creates a striking shape, the arc-shaped light bar that runs across is quite futuristic. The sleek front reduces the drag coefficient down to 0.236Cd, something that electric car makers work really hard to achieve in order to improve battery range. The design of the P7 has that timeless vibe and probably won’t feel outdated for at least 10 years. 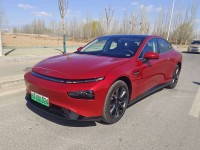 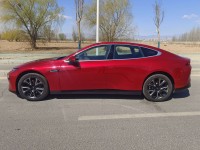 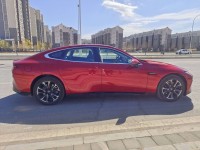 The side of the P7’s body is relatively smooth, it doesn’t use any traditional hard-edged body lines and it gives the vehicle a seamless look - all the way from the front to the rear. P7 is a fastback and the rear carries on with the same aesthetic as the front - a full-length light bar stretching across the boot with little overlaps onto the sides. The rest of the back is pretty simple, two more separate rear lights on both sides, the Xpeng logo stretched out below the light bar, and a P7 model designation on the lower right of the boot. 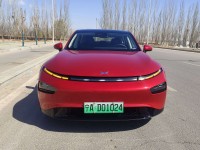 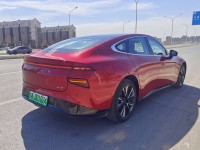 The front and the rear of the P7

The interior of the Xpeng P7 is very clean and modern yet it keeps some areas traditional. The dashboard is very minimalistic with the air vents tucked away underneath and out of sight. All areas that can be touched are made of high-quality materials, mainly soft leatherette with some chrome added in places. Areas that are rarely touched use hard plastics though, not surprising considering the price of the car. The build quality is on-par and maybe a bit better than what’s expected at this price point, most areas are sturdy and feel great. 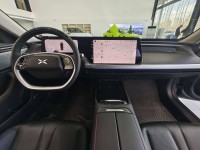 Up front in the P7

The seats are all quite comfortable, and the leather used is nice and soft giving a good sense of quality. However, both the front and rear seats are quite shallow and as a result, the leg support isn’t that great. Head and leg space is ample, the seats feel spacious but unfortunately, the floor in the back is not completely flat, which means that the middle passenger on the long journeys won’t feel as comfortable as they would in any other seat. 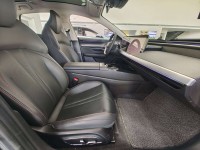 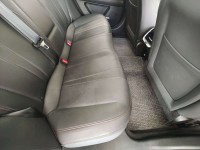 The dash and the rear seats

The boot is a pretty good size, it is a bit shallow and quite long to reach into so getting things from the very back of it can be hard. There is dedicated space to put a backpack or some shopping bags under the bonnet - another car utilizing the “frunk” idea which is just fantastic. 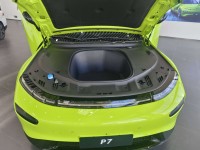 The frunk and the trunk (froot and boot?)

The cockpit on our test car is equipped with a 10.25” LCD instrument panel situated behind the steering wheel and an integrated 15” central infotainment screen. Both screens are blended together under a single piece of glass. The car can be equipped with 18 Dynaudio speakers with support for 7.1.2 channel audio but our test car had the standard 8 speakers. They still sounded pretty good, though. The P7 uses an Xmart OS system with nearly all the functions of the car controlled via voice using Xpeng’s virtual assistant. We have tested the Chinese version of the car using Chinese spoken commands. This is one of the best systems we’ve used in terms of response speed, recognition rate, and the number of functions controlled. Smart OS supports downloads of mainstream applications for music, karaoke, gaming, video, and also e-commerce.

All of the apps are provided by the Xiaomi app store (Lei Jun, the founder of Xiaomi, and Xiaopeng, cofounder of Xpeng, are close friends). However, it is worth mentioning that the P7’s in-vehicle system relies heavily on good connectivity. When driving in areas with poor signal, the user experience will definitely be hampered.

Having a car that almost doesn’t have physical buttons can get annoying though, the boot has no button to open it manually. You will need to use voice control, your phone, or the key to get it opened - imagine standing in the rain, both hands full of shopping, shouting at the car… Also - the side mirrors can be only adjusted using the infotainment screen at first, only after that initial adjustment you can use the steering wheel-mounted touch-sensitive buttons - why? It feels way too complicated. Both rear-wheel-drive models accelerate from 0 to 100kmh in 6.7 seconds, the 4WD version does the same in 4.4 seconds. The ranges quoted are as follows: 470km for the Performance model and 530km for the rear-wheel-drive with 80.9kWh battery according to WLTP tests. The range of the P7 with 60.2 kWh battery is 480km according to the New European Drive Cycle (NEDC) which is always a bit too optimistic so take this range with a pinch of salt.

We have tested the 4WD Performance P7. It offers three driving modes: economy, standard, and performance. Driving in these different modes naturally caused different changes to the way the car drove, mainly the torque delivery and the strength of regenerative braking. In performance mode, the acceleration is more instant and feels very strong, the regenerative braking is the weakest of all modes. On the other hand, the economy mode has the weakest acceleration and the strongest regenerative braking. The standard driving mode fits right in between the other two. In fact, in the standard mode, if you can control the accelerator pedal reasonably well, you can use regenerative braking to brake without needing to use the brake pedal. During our time with the P7, it seemed that the “one-pedal driving” technique, as introduced by Nissa, was entirely possible without any special mode that some other cars use.

After the test drive, the main feeling was that the P7’s chassis is indeed well-tuned and taut. It is worth mentioning that Xpeng has employed German carmakers’ tradition of focusing on vehicle control in terms of handling. This shouldn’t be a surprise though, considering the chassis was co-developed with Porsche. The steering is well damped but not too heavy, reasonably well-weighted. It is sensitive and precise. The braking on the other hand is a bit soft, it takes a heavy foot to exert relatively strong braking force. The Xpeng P7 is riding on Pilot Sport 4's

In terms of suspension, Xiaopeng P7 uses a completely independent setup - front double wishbones and a rear five-link. This results in the car having stronger lateral support which is reflected when cornering. P7 uses the Continuous Damping Control (CDC) system to adjust damping in real-time, according to road conditions, and comes with three predefined settings. The shock absorption performance is remarkable and the ride quality is pretty good, definitely designed with a Chinese audience in mind though. When driving over small bumps and potholes there is basically not much information transmitted to the car. The wind noise is well suppressed up to 100km/h but the tire noise is clearly noticeable from the speed of 40km/h.

The Xpeng P7 is a very technologically advanced EV that focuses on improving driver experience. The ride quality will be good for some, especially those looking for a family saloon that has a modern and unique design. P7 offers a very generous specification list for the price, with plenty of space all around. Its autonomous driving abilities are very advanced as well, being able to deliver L3 driving which is better than a lot of other rivals at even higher price points. The build quality is better than average as well and it makes the P7 stand out amongst the competition. Allot problems with this car in winter time end if you parking car like somewhere in doenhill then dors don't want to open or closing you have to press button in the key or sometimes on the screen..