Today we had a chance to test drive the AITO M5, the midsize SUV co-developed by tech giant Huawei and Seres (formerly called SF Motors). It uses a range extender, similar to the also popular Lixiang One. A range extender and hybrid differ because in a range extender, the internal-combustion engine only functions as a generator for the batteries - never driving the car’s wheels directly.

The AITO M5 is Huawei’s second attempt at building a car after the Seres SF5 released in 2019. The M5 is actually just a rebranded SF5 with modified exterior body panels and a different interior released under a new car brand named AITO, which stands for "Adding Intelligence to Auto". It was announced in December 2021 and the first deliveries began last month. 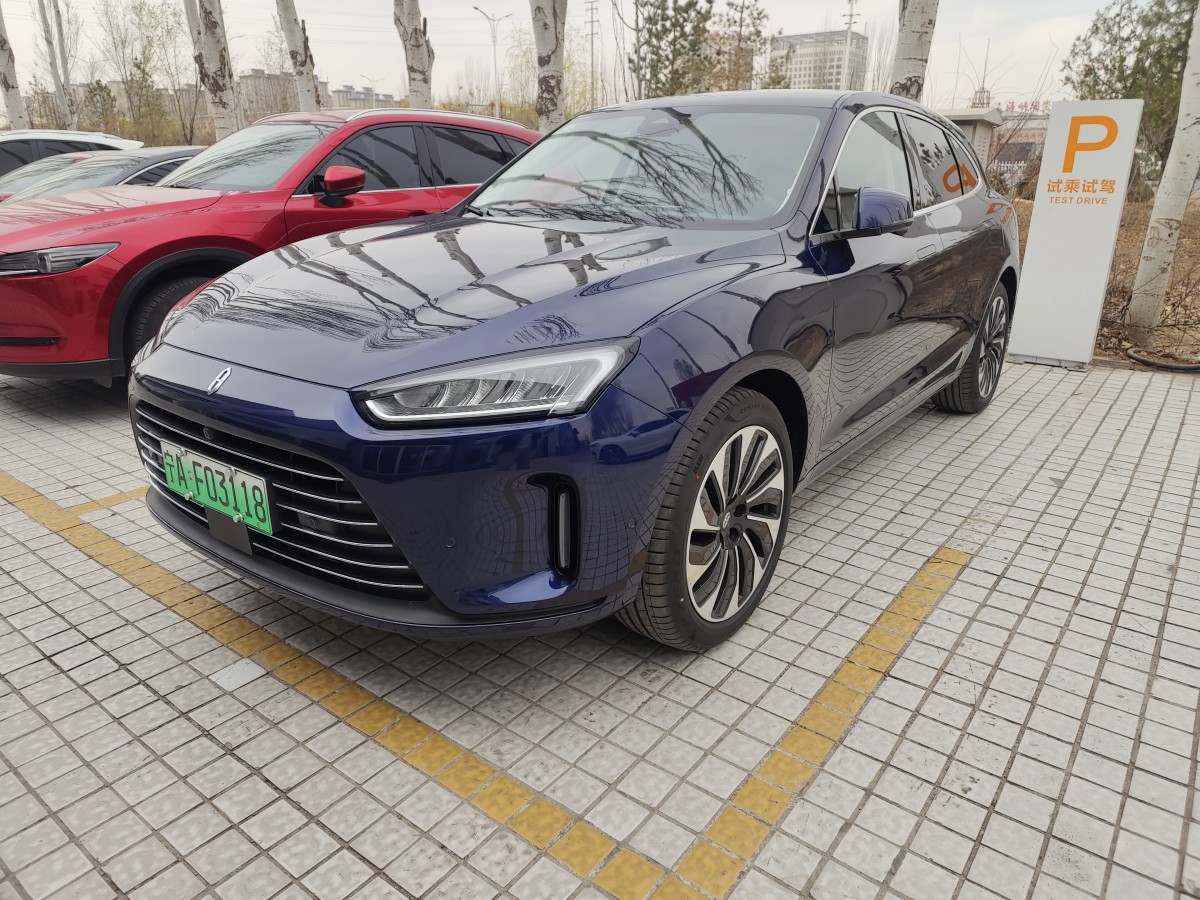 What does Huawei have to do with this car then? Huawei developed the Drive ONE - three-in-one electric drive system. It includes seven major components - MCU, motor, reducer, DCDC (direct current converter), OBC (car charger), PDU (power distribution unit) and BCU (battery control unit). The M5 car's operating system is based on HarmonyOS, the same one seen in Huawei phones, tablets and IoT ecosystem. The audio system is engineered by Huawei too. That’s not all, exterior and interior design as well as performance configurations all had input from the tech giant.

Huawei and Seres have not announced plans to release the car in any overseas markets yet but if sales are good in China then expect to see some official news in the future. Huawei definitely has confidence in its car with Richard Yu (CEO of Huawei’s Consumer Business and CEO of the Intelligent Automotive Solution unit) announcing that the M5 is comparable to that of million-dollar luxury cars and plans to make AITO one of the top three global EV brands within five years. We all have dreams right? I can just picture all the billionaires lining up to buy Aito, giving up all the Bentleys and Bugattis just to get their hands on the new shiny M5…

The car we test drove was the top specced flagship model. 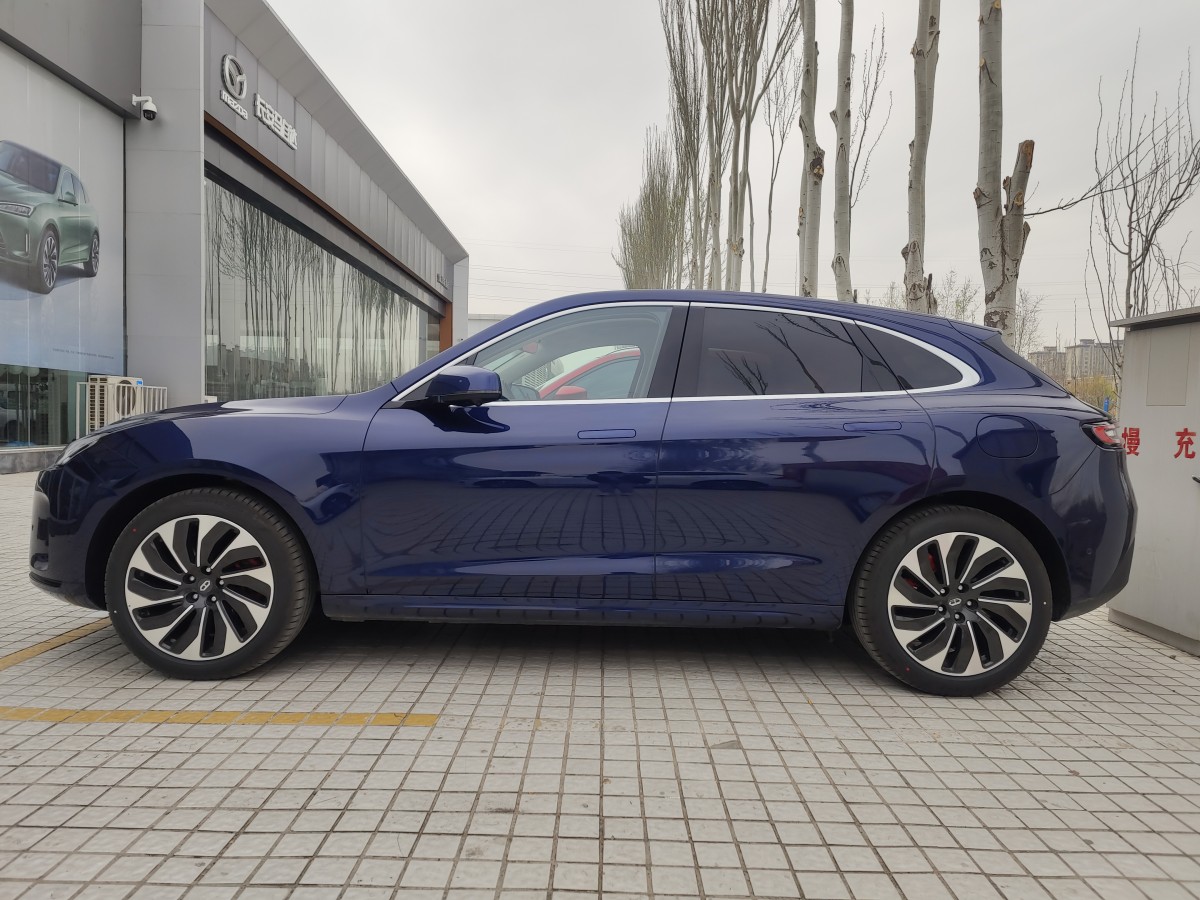 The exterior of the AITO M5 is simple and aerodynamic, with flush door handles and a few sharp edges across the side panels and on the bonnet. 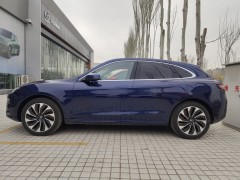 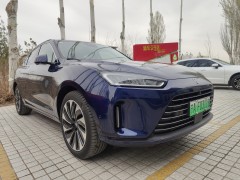 The face of the vehicle looks pretty aggressive with the large chrome-trimmed grille and slanted shark fin headlights, a much better look compared to the Seres SF5, if we are to be honest. There are two vertical daytime running lights/turning lights below the headlights and a new symmetrical AITO logo in front of the bonnet.

The rear definitely takes some design ideas from a few luxury car brands (cough, Macan) with the word AITO being in between the full-width rear lights, however, it is a nice design and one that a lot of SUVS nowadays seem to be using (BYD Tang). 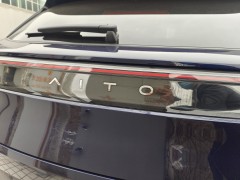 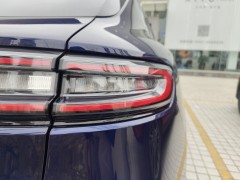 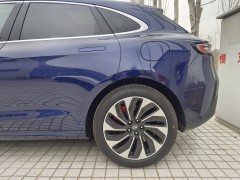 The center console area houses a single cup holder, the gear selector and a phone holder with wireless charger built-in. This is not your usual wireless charging though - Huawei installed a 40W coil and because it produces more heat than wired charger, the phone holder has a fan at the bottom that automatically turns on when the phone is charging. In addition to this, there is 1 USB Type-A port and 4 USB Type-C ports with 66W fast charging support. The panoramic sunroof is nearly 2 square meters large going from the front of the car to the rear and offers 97.7% undisturbed views, using a Low E glass (lower emissivity. It can block up to 99.9% of UV rays, providing a heat reduction of over 40% compared to other panoramic sunroofs according to the company. 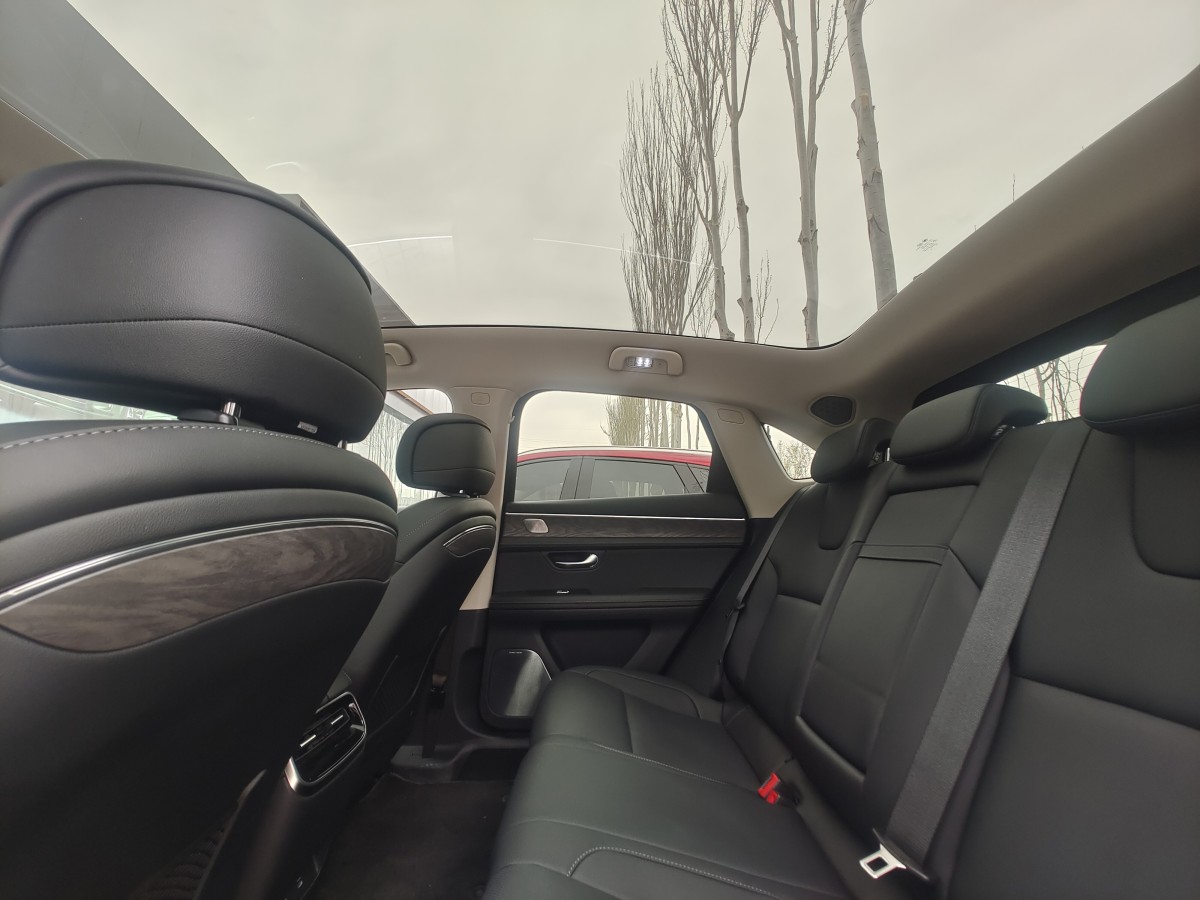 The seats use nappa leather and are pretty comfortable, the driver's seat automatically moves backward when the door opens to give the driver more space to get in, and it moves back to its original place after the door is shut. Seats in the front come with heating, ventilation and massage and those in the back just get heating - which is still pretty nice. 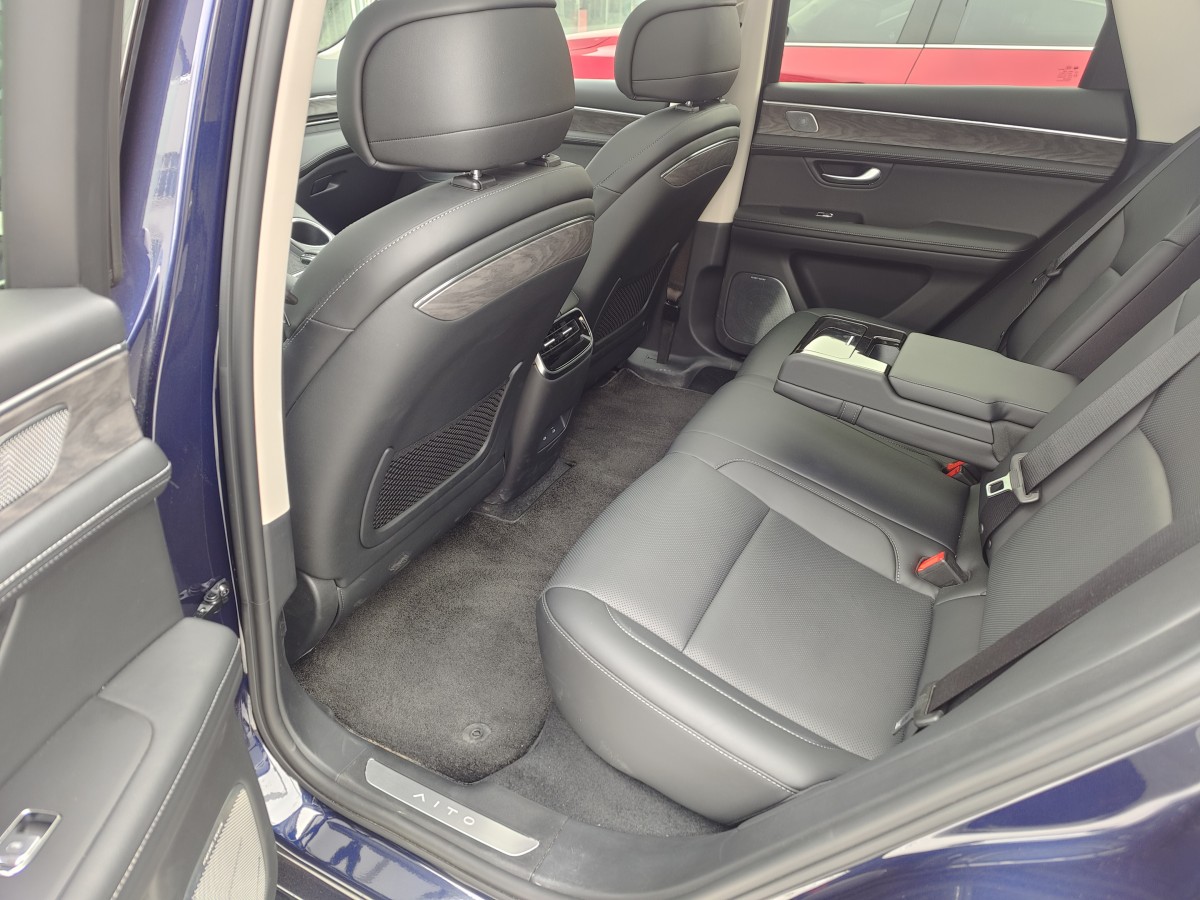 The leg space in the back is ample which is surprising considering the pretty average wheelbase of 2,880mm, seats are firm and the sides slope inwards a bit so you feel very cozy, however the middle seat is not that great and not suited for long rides at all. 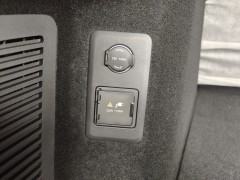 It’s time to test Huawei’s expertise in creating fluid, smooth operating system, shown for the first time in a car. The center console is filled with the giant 15.6 inch infotainment screen with a system based on HarmonyOS. The screen resolution is 1,920x1,080 and it has HDR support. The HarmonyOS system runs amazingly well, the whole system offeres unprecedented customization and Huawei has definitely made it very intuitive. The camera on the driver's side can recognise faces and automatically adjust themes/homescreens to the driver. The driver's side camera

If paired with Huawei phones, smart watches or pretty much anything else in the Huawei ecosphere then everything is linked together really smoothly - want to go somewhere and have the location on your phone? Just send it to the car and it’ll open the navigation app for you.

The driver's most used controls will be on the left hand-side making it easier for access and nearly everyone who uses a phone will be able to use this infotainment without much difficulty. However, being too similar to a phone or a tablet experience made us swipe up from the bottom to go back to the homepage a few times when actually going to the homepage requires clicking the Home button in the lower left corner. The cars voice assistant has functions on par with other cars, however its AI is pretty clever, being able to recognise who is speaking - driver, front, left or right rear occupant. It is quite natural, it supports continuous dialogue and will keep listening for a minute for any instructions that may follow and knows to block out the conversation you might be having with your friend, however, this is not perfect. We purposely used some “commands” in the conversation we were having and the system did get confused.

For a more detailed review of the HarmonyOS powered entertainment in this car, please head over to our sister site GSMArena.com. The audio system uses Huawei Sound, has an output of over 1000W with 15 speakers and 7.1 surround sound. The speakers can reach a frequency of as low as 30Hz which we definitely felt whilst listening to some tunes and the sound quality was excellent, much better than some other car models who slap on a “branded” speaker system. Huawei mentioned that when designing the sound system they used the Bowers & Wilkins found in the Volvo XC90 as a benchmark and we could really appreciate their efforts in music genres such as pop/rock etc.

However, in music where the vocals were clearer then it fell short. In our flagship model the driver's headrest also has 4 Huawei Sound speakers built in so that when other passengers are sleeping or resting in the car, the music, calls and GPS instructions can all be sent through the headrest speakers and directly to the driver without disrupting the other passengers.

As said earlier, the AITO M5 is a range extender EV, and is equipped with a 1.5L turbocharged 4-cylinder engine with a 56L fuel tank. The AITO M5 comes in two electric motor configurations, a rear-wheel drive model and a 4WD model. Access to the battery and rear motor under the floor

The range is obviously going to be higher than any electric car out there right now but if driving on only the battery then you can drive 140km (NEDC range) on the 40kWh battery. Paired with the range extender, which can produce 3.2kWh/liter, the whole range is quoted at 1000km (NEDC) which is a lot. It’s easy to see why people who regularly go on long road-trips would benefit from a range-extender EV compared to a pure EV.

The car we drove was the flagship model. The AITO M5 drives really well, it’s oriented towards sportier driving styles and the ride is quite stiff but precise, steering isn’t overdone in any way.

Driving on urban roads, you only need to step on the accelerator pedal lightly, and you can feel the strong power of the M5. The car provides four driving modes - economy, comfort, sport and custom, but due to the general characteristics of the drivetrain, the acceleration at the start and middle sections is always very fast, and the acceleration can be felt until it is above 120km/h where there will be a significant slowdown. After our experience with the car, we felt that the officially claimed 100km/h acceleration of 4.4 seconds is quite accurate. In addition to the acceleration performance, the chassis of the M5 is also good. The front double wishbone with rear multi-link independent suspension not only has pretty decent shock filtering performance, but also is good in roll control.

However, compared to the power delivery, the braking performance of the M5 is a little disappointing. When pressing down on the brake pedal, there’s a large part of the movement where it doesn’t seem to have much reaction, and it takes a proper stomping to obtain a relatively strong braking force. This may be to reduce the dizziness caused by frequent acceleration and deceleration, but for an SUV with a weight of 2.3 tons, this kind of braking behaviour makes us a little nervous.

As a passenger, the ride is very peaceful, by using double-layered sound insulation glass, acoustic damping material on the floor, and silent P-Zero tires, the noise inside the AITO M5 is rated at about 56.9 dB at a speed of 80 km/h and you can definitely appreciate the silence. If you’re not a fan of the eerie silence then the AITO M5 has an engine sound simulator to make you feel at home, with 3 different sound settings - move, thrust and tech.

The AITO M5 co-developed by Huawei is definitely a car that has all the bells and whistles that you need. Huawei has spent a lot of time researching and ironing out the mistakes they made with the Seres SF5 and the final product is refined, intuitive but is also fast with plenty of power when needed.

Things like having an AC output in the boot or the camera on the drivers side which automatically logs you into AITO/Huawei account and then makes the infotainment use the themes/setup that you saved - makes this car feel a part of you, especially if you have a Huawei phone.

The main downside is the unimaginative design that shares a few too many elements with the Porsche Macan, the button to open the boot is even in the same place (in the rear screen wiper). There's also the lack of privacy people may feel with the driver-side camera. However if you can look past those details then the AITO M5 is an awesome choice instead of an ICE for those who live in areas with underdeveloped electric infrastructure or those people who have “range anxiety” and don’t want to commit fully to buying a pure electric vehicle.

Consumption is a bit less than 21kWh/100km, from the 1000km range. It's so because of the (old) telephone/bus shape/size of this object... The A counts twice I have the same complaint for my modern Huawei phone: too damn big, and eats up the b...

The fuel consumption is similar to a normal diesel or petrol car. I don't see any benefit of its electric part, other than pick up speed