The long-awaited Hyundai Ioniq 6 has been finally unveiled and first impressions are really positive.

We were worried the company may extensively water down the design based on the Prophecy prototype from 2020 but the overall shape is still there, most of the details are retained. Of course, there are concessions due to manufacturing constraints and safety regulations, the Ioniq 6 is nowhere near as dramatic as the prototype was but it is a really handsome EV, it brings a much-needed breath of fresh air to the industry that is desperately scrambling to attract customers joining the EV revolution. 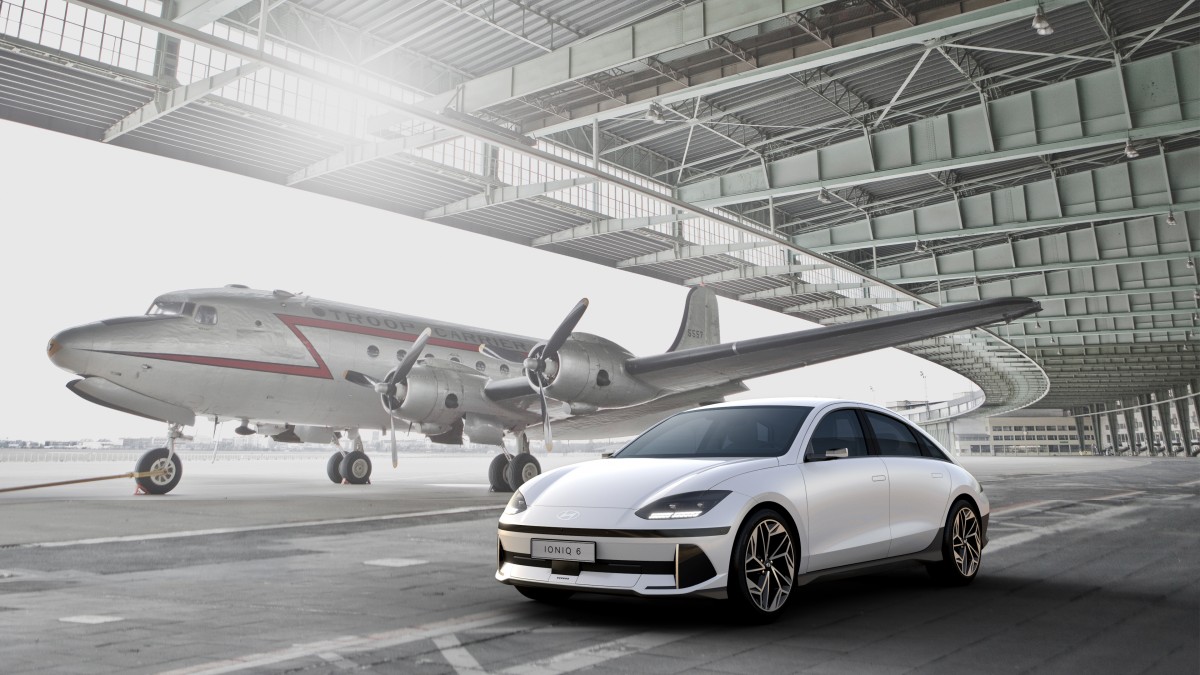 Hyundai Ioniq 6 is based on the same E-GMP platform as the Ioniq 5, Kia EV6 and Genesis GV60. It will share the battery and the motors with its siblings. The base model will most likely come with the smaller 58 kWh (usable) battery and a rear-mounted 125 kW (168 hp) motor unless Hyundai decides to skip this option and only offer the 77 kWh (usable) battery. In that case, the entry model will come with the stronger, 160kW (218 hp) and 350 Nm electric motor powering the rear wheels. 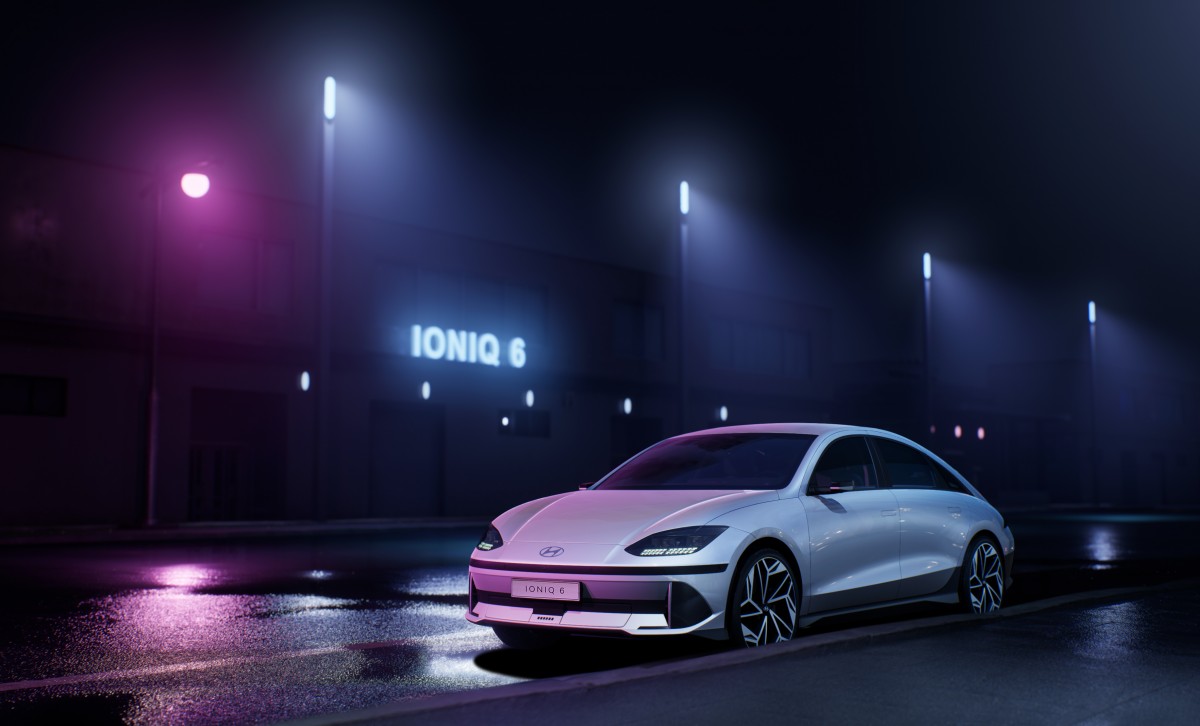 You won't mistake it for any other car

There will be two AWD versions - Standard and Long Range. Just like in the Ioniq 5, the difference won’t be just the bigger battery. The 58 kWh battery pack will be coupled with two electric motors giving the total power of 173 kW (235 hp) and the bigger 77 kW battery will be offered with 225 kW (306 hp) twin electric motors. Both versions will have the same torque of 605 Nm. Just like with the Ioniq 5, the American market versions will be slightly more powerful with slightly more usable battery capacity - it is the same battery just running different software. 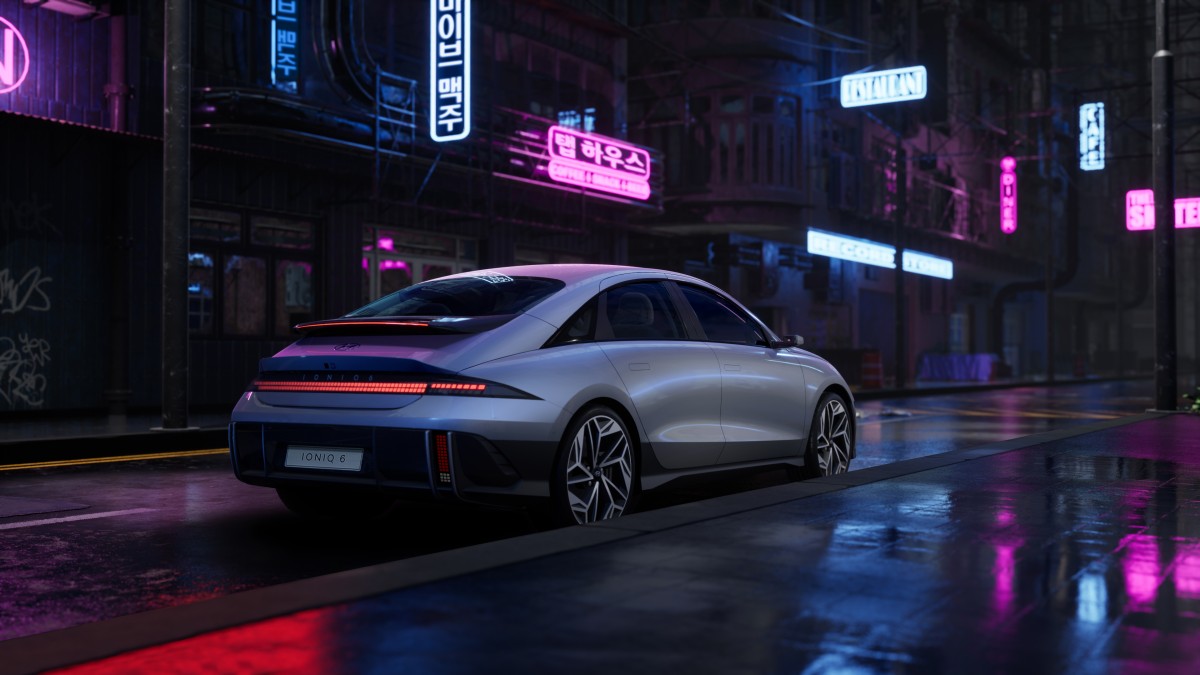 The great news is that we will see the N version of Ioniq 6. It’s no longer a secret, Hyundai has been considering introducing the fast version of Ioniq 5 but the new model lends itself much better for introduction of the performance trim. The car will share underpinnings with Kia EV6 GT and we can expect twin electric motor setup with 430 kW (585 hp) and 740 Nm of torque. Performance will be as good if not better than on Kia and we will see the first production model from Hyundai with sub 4 seconds acceleration time. 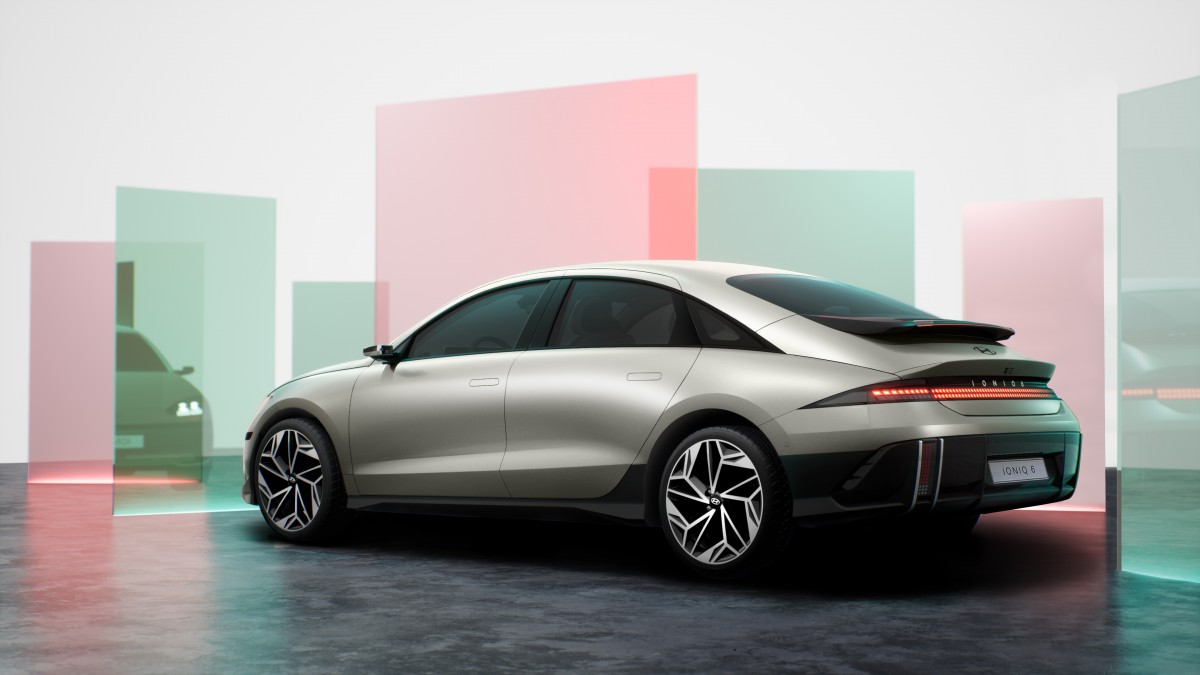 Mercedes CLS and Porsche lines and lights were clearly an influence

When it comes to electric driving range of the Ioniq 6, we can expect higher numbers than from Ioniq 5. The cars are of similar size with the Ioniq 6 being longer at 4,855mm and narrower at 1,880 mm and not as tall at 1,495 mm. The Ioniq 6 has a much better aerodynamic performance with Cd 0.21 which will add to the range quite substantial numbers - the company is working hard now on finalising the tuning and software and it looks like we will see the first 500 km electric Hyundai. 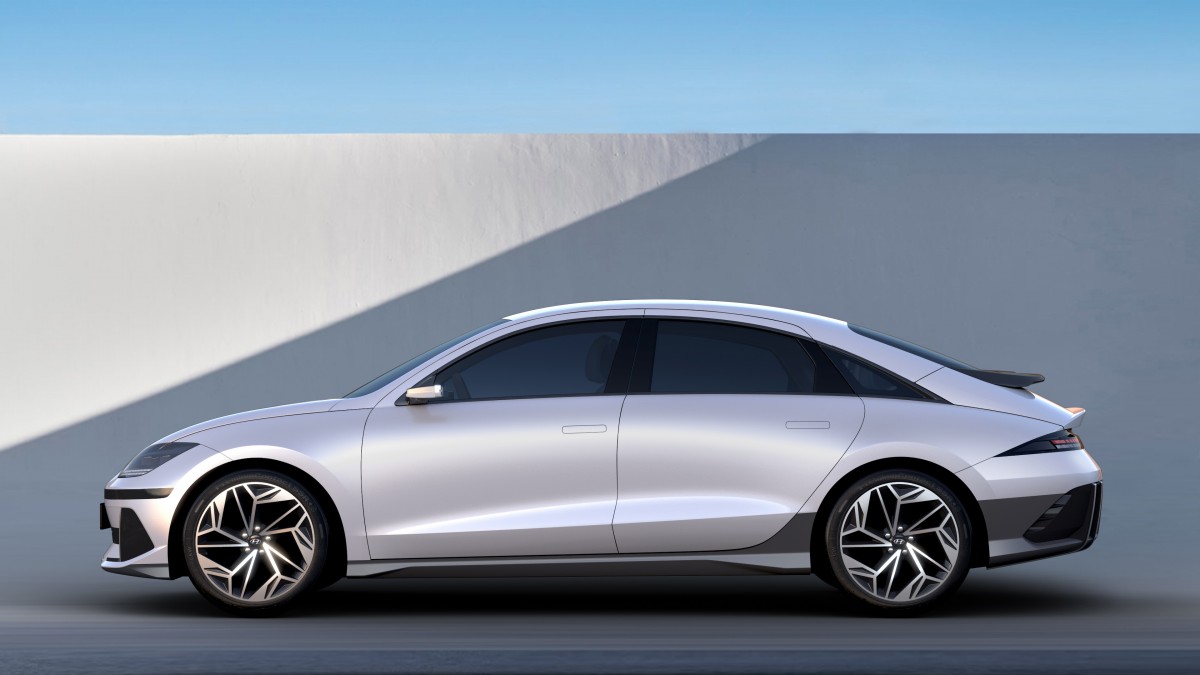 Car tuners will be busy with lowering kits

Let’s talk about the design now. On the outside we have this amazing modern take on the classic Streamliner, not much different (if you squint your eyes enough) than Mercedes EQXX but really more like the CLS from the early 2000s. There is a lot of design influence from Porsche with the rear lights and the ducktail spoiler. The front is reminiscent of older Hyundai Coupe but again mixed with Porsche influence. It’s an amalgamation of designs but it’s really well executed and the result is, arguably the best looking 4 door sedan right now. At least until the VW ID. Aero comes to the market. 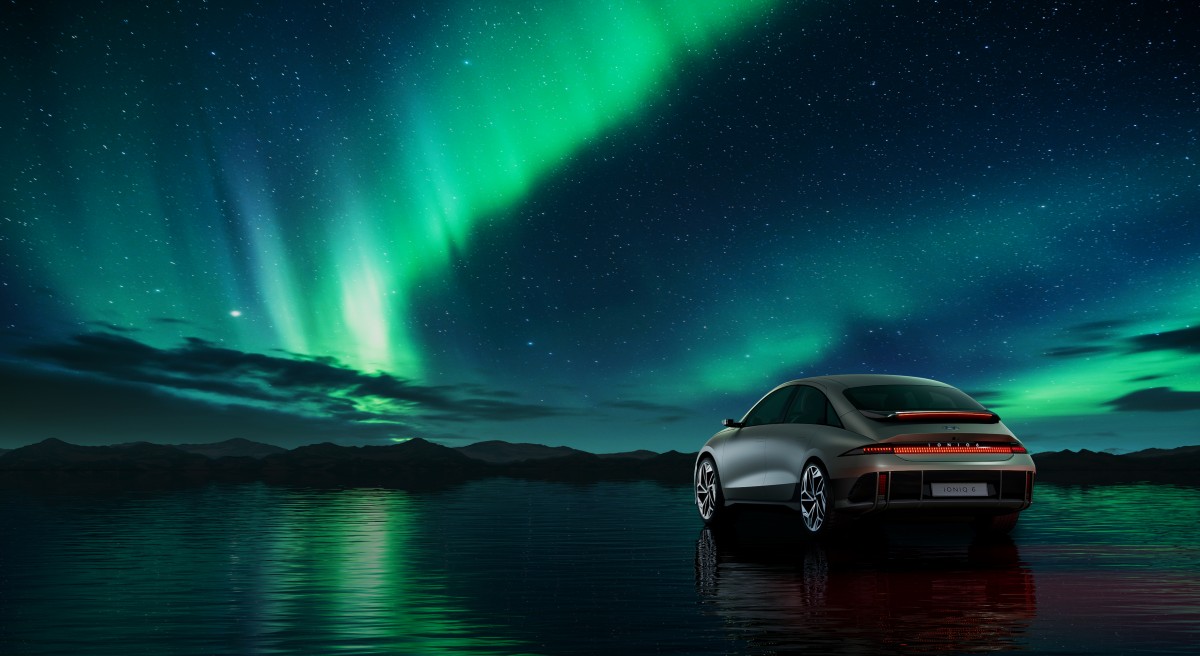 Marketing photos can be misleading - don't take your Ioniq 6 swimming, it won't float

The interior is just as good as the exterior. Sorry - not an interior anymore, Hyundai refers to it as “living space”. There are plenty of eco-friendly materials and recycled fabrics in use but it’s the space itself that is surprisingly big, especially the headroom. Looking from the outside you can expect the space to be tight and rather cramped but it’s quite the opposite. Hyundai designers must have spent endless hours watching Doctor Who end exploring his Tardis. 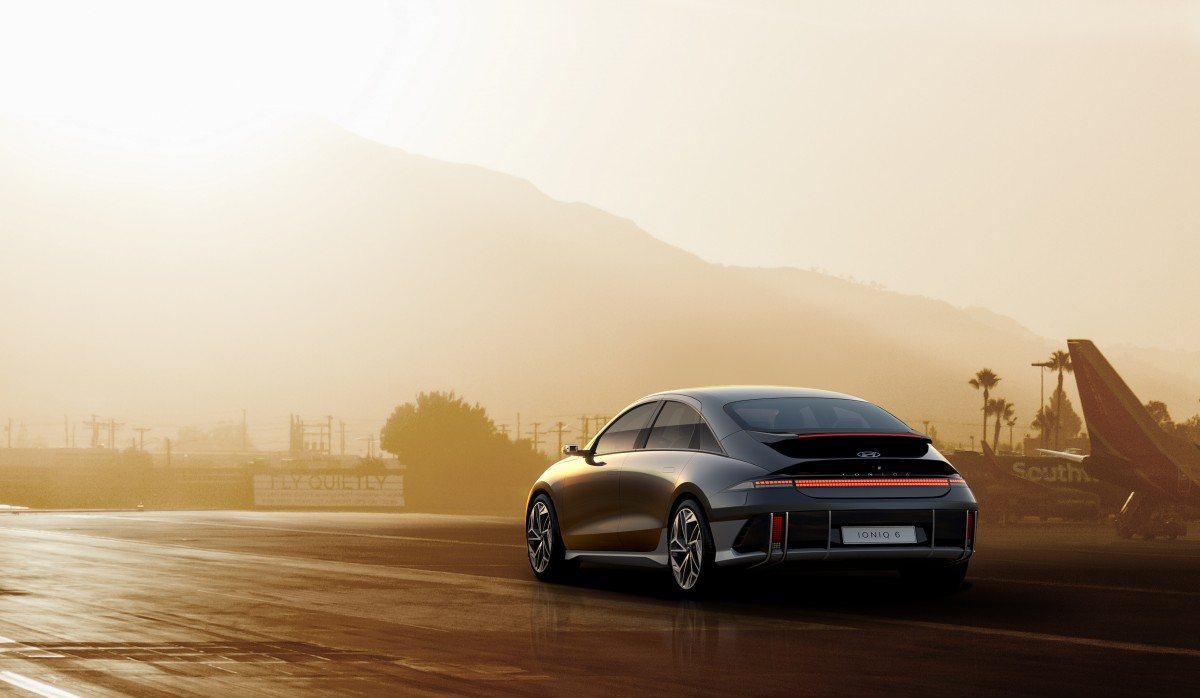 The sign in a distance says "fly quietly" - perfect

Up front we have two 12” screens sitting behind a single piece of glass. There’s a separate control panel for heating and air-conditioning. Center console sits high between front seats and comes with plenty of storage and wireless charging for phones. Window switches are no longer on the doors, they have migrated to the center within easy reach of driver and the passenger. Steering wheel has a 2-spoke retro design with 4 LEDs taking a prominent position in the center of it. They are showing progress of charging when the vehicle is plugged in and when the driver uses voice control, those 4 pixels illuminate to mimic the car’s response. It’s a neat visual representation and a feedback at the same time. Another really neat trick comes courtesy of ambient lights - when you approach a fixed speed camera, the interior lights will flash red to keep your wallet and driving license safe. The Ioniq 6 will offer rear view cameras instead of side mirrors in some European markets. This option won’t be available for now in the American market since the legislation isn’t ready yet. Instead, the car will come with standard side mirrors and the internal mirror screens will be replaced with a much smaller design feature. 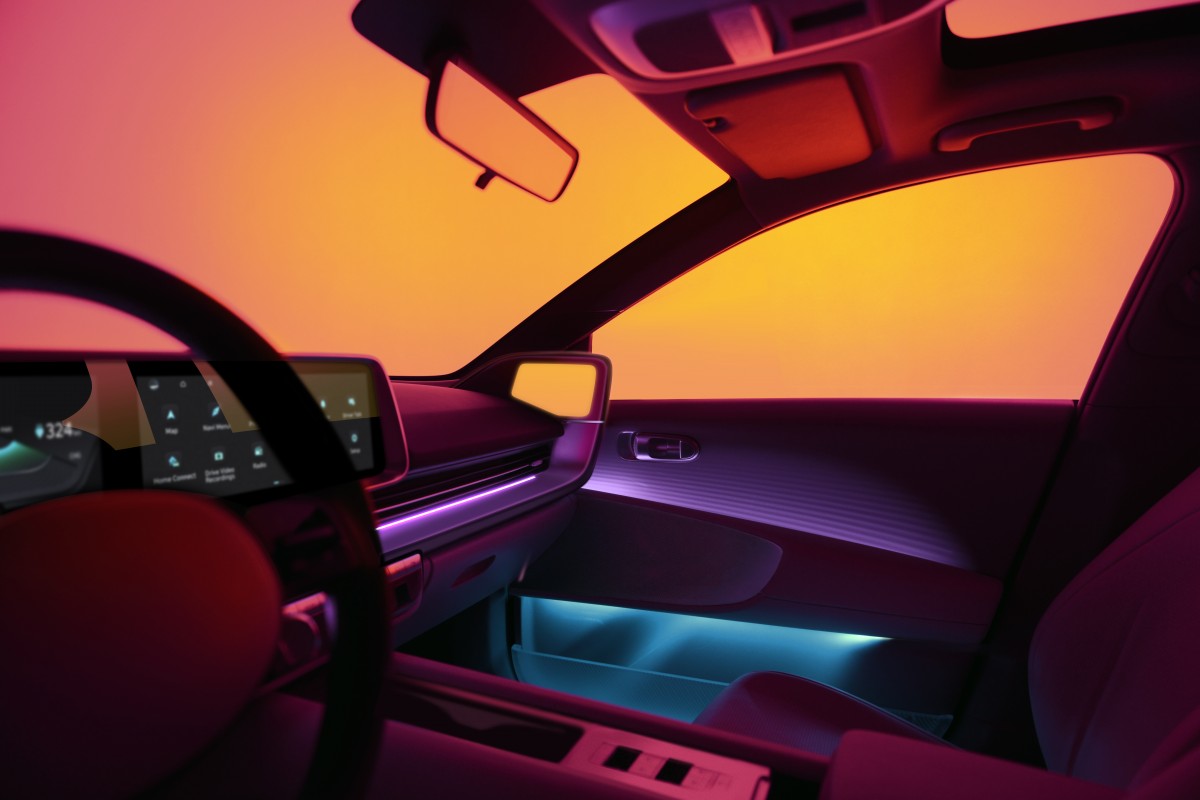 The space in the rear continues with the theme of the whole car - ambient lighting, translucent door pockets (which are a great idea by the way) and room, bags of room. The headroom again is a huge surprise, with the swooping roofline we expected to see a restricted room in the back but that’s not the case. There’s enough room for 6 footers to stretch and enjoy even a long journey. 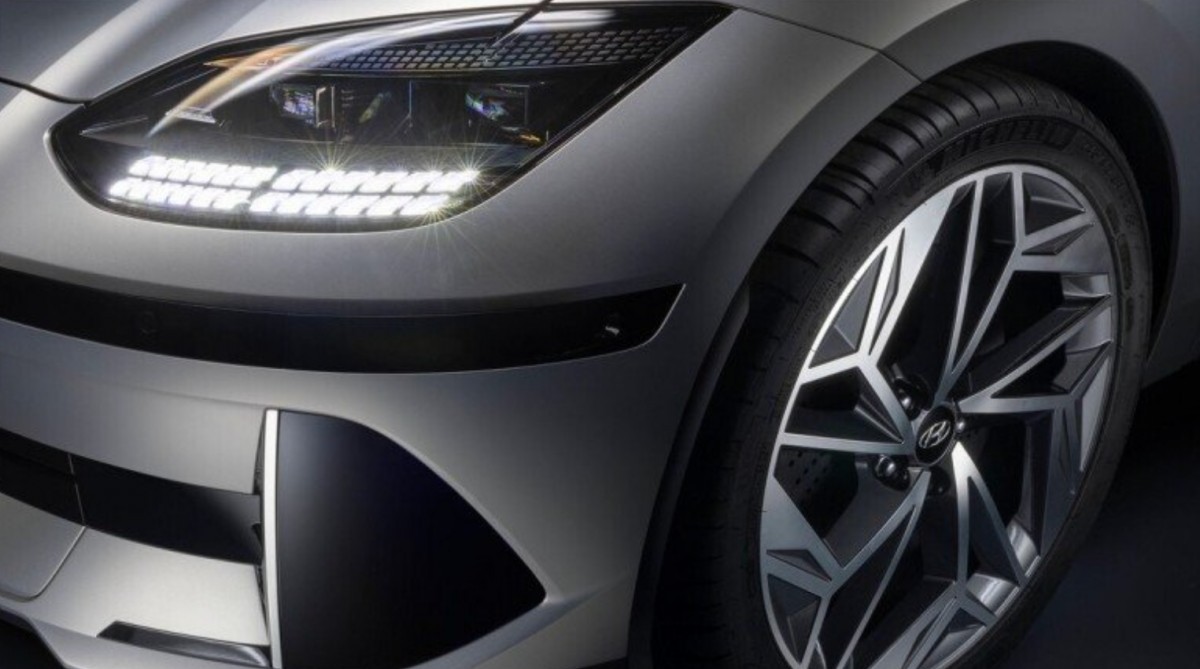 The Pixel headlights are unmistakable

Hyundai is tight lipped about the luggage space. The company has confirmed there is a frunk in the new Ioniq 6 and the design team was tasked with making sure at least two full size golf bags can fit in the trunk. They apparently achieved that but expect the trunk to be fairly shallow, long and not too wide. If golfing is your favorite pastime then this can be a perfect car for you. The final piece of the puzzle that will make or break the success of Ioniq 6 is its pricing. Since the car is similar in size to the Ioniq 5 and it shares its underpinnings with it, we can expect the prices to start on similar level although we need to adjust for recent costs increase and the fact that Ioniq 6 will be marketed at slightly different customer - importance of golf bags is the clue here. It won’t be a €35,000 car, we have no chance for that but it will start at around €38,500 in Europe before any local incentives. The performance N version will sit close to €70,000 and the Long Range AWD model should start at around €55,000. 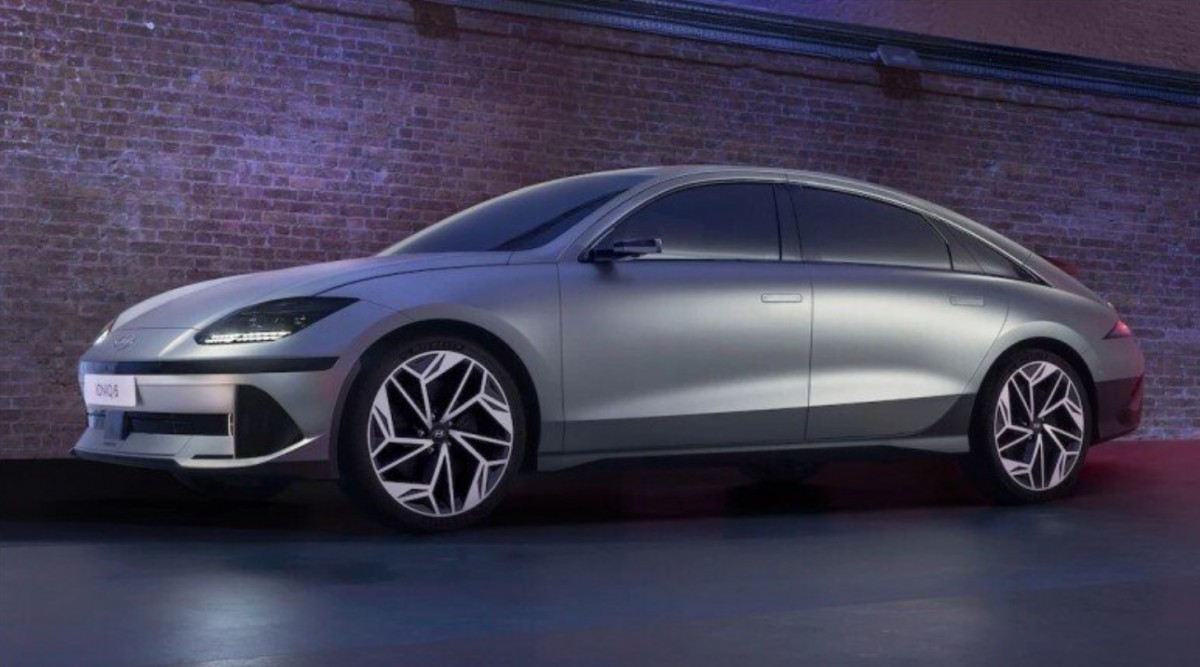 Ioniq 6 will take customers away from Tesla 3

The days of cheap Hyundais are long gone, electric cars are far from cheap and the supply and demand is dictating much higher prices putting many good cars out of range for many people which is a huge shame. Nevertheless Ioniq 6 is a truly good looking car, with some great technology, good performance and good driving range. With its Pixel lights and refreshing design it will stand out on the road. Hyundai has got another success on its hands, this car will sell like there’s no tomorrow. And since it’ll be available from the end of this year, I’m canceling my Fisker order and going for the Ioniq 6. Better bird in hand than two in the bush - and what a good looking bird that is.

Car is not fully unveiled. This will be soon.

Sorry never like the jelly mode design...it reminds me of the infamous Ford Falcon from Australia years ago...hedious