Our latest test drive is with the NIO ET7, a luxurious high-class sedan made by NIO, a company famous outside of China for its EP9, which posted the fastest lap record at the Nurburgring.

NIO, however, is becoming more and more well-known for its quality pure electric vehicles, having already released three production car models (the ES8, ES6, and the EC6), with the ET7 test-driven here, being its fourth. The ET7 is its most advanced model to date, utilizing the newest technology in autonomous driving, and is also the first to come with the NIO 2nd Generation Digital Cockpit.

The ET7 is expected to go on sale in Norway later this year, however European prices have not yet been released. The ET7 for the overseas market is expected to be released with the 150kWh solid-state battery pack only. The ES8 that has been sold in Norway, entered the market at a lower price than in China so the prices for the ET7 might be cheaper than those for the Chinese market. NIO also plans to launch the ET7 in Germany, the Netherlands, Sweden, and Denmark by the end of 2022.

The ET7 we tested was a pre-production Premium Edition model and some of the software features were not available. 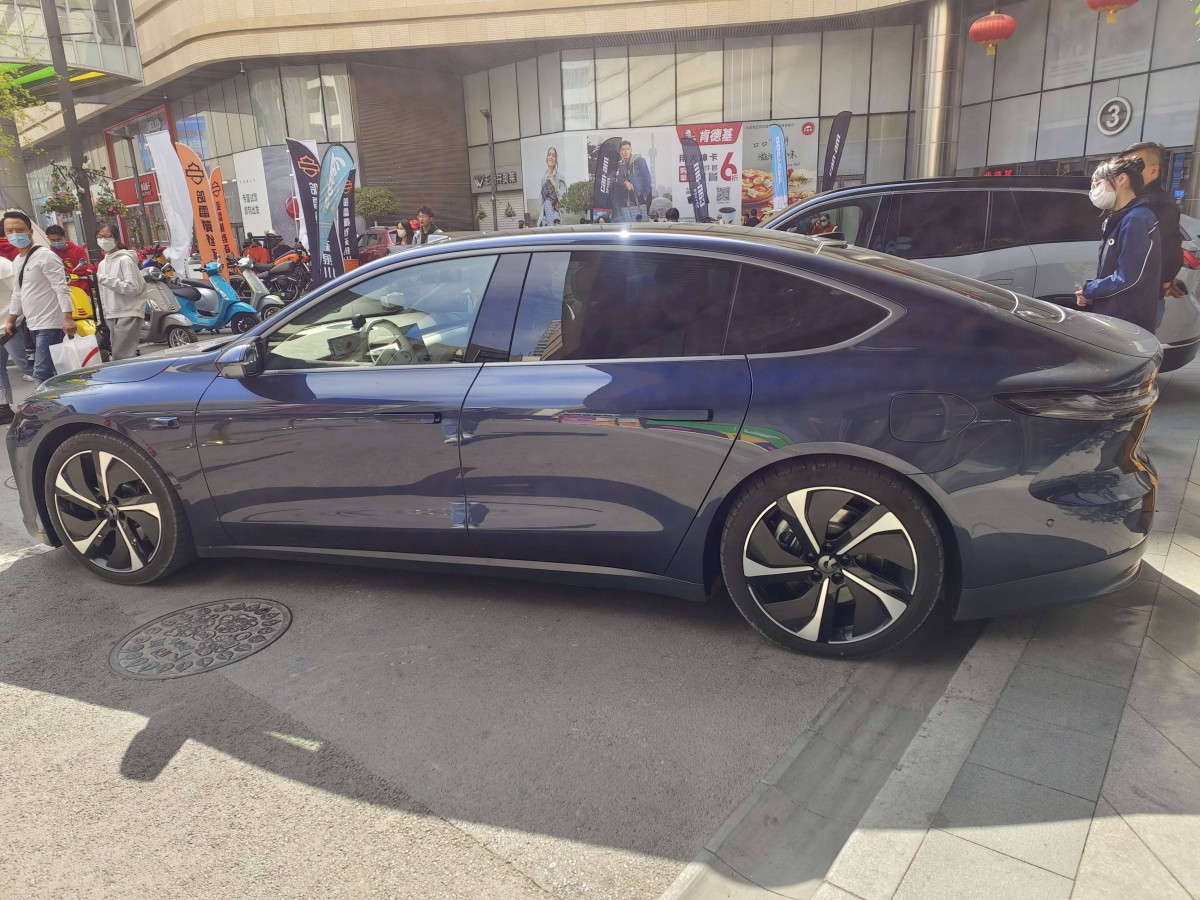 The ET7 has its own unique design and it definitely looks impressive. At the front you have the dual-beam LED headlights which feature what NIO calls “Double-Dash” daytime running lights. This design is used at the back with “3D heartbeat” full-width rear lights. Although we couldn’t really see the “3D” bit, the lights do look good on the car. 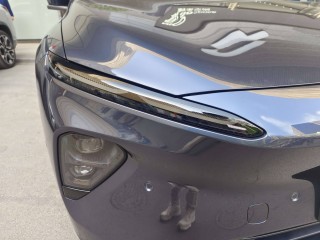 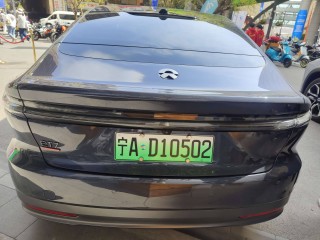 The headlights and brake lights

The silhouette of the ET7 is very sleek and aerodynamic and NIO worked really hard to bring the drag coefficient down to 0.208 which is very low and surprising considering that above the windscreen is what the carmaker refers to as the “Watchtower”. It’s where the ultra-long-range high-resolution LiDAR sits in the middle, with 8MP cameras on both sides, all protruding quite a bit. 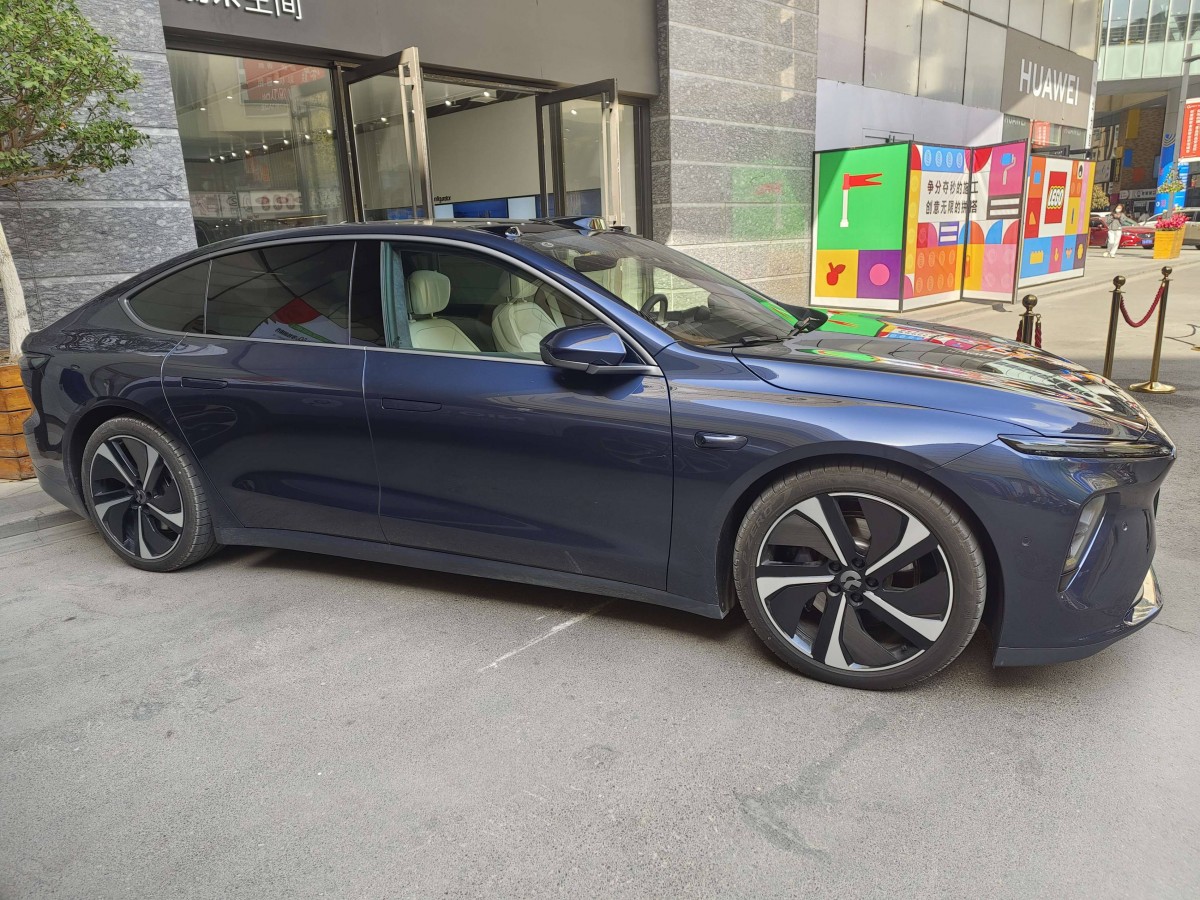 The ET7 has soft-close doors with frameless double-glazed windows which give it a sophisticated, yet sporty look. The invisible door handles pop out when you approach the car, and when you rest your hands on them the door will automatically pop open a bit thanks to touch sensors in the back of the handle. When you are seated, the door will close up with a soft pull and when you want to exit the car, you just press the button on the side of the door and it will open up for you. 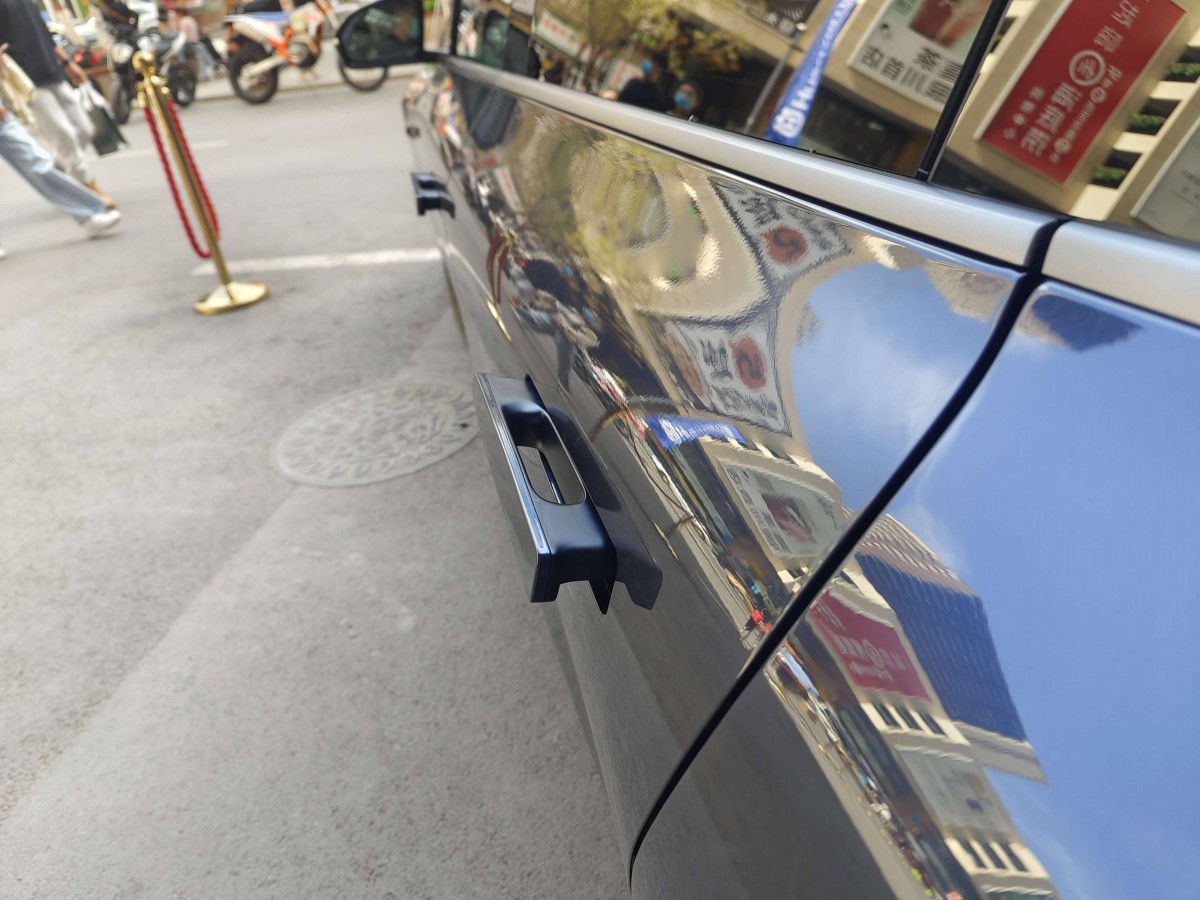 NIO has been pushing a narrative of a “Second Living Room” in your car. We felt like it had almost reached its goal of creating something that could actually be as comfortable as your own living room. The interior of the ET7 is spacious, refined, and modern, with the floating displays, two-tone steering wheel, and invisible air vents giving the car a futuristic feel. 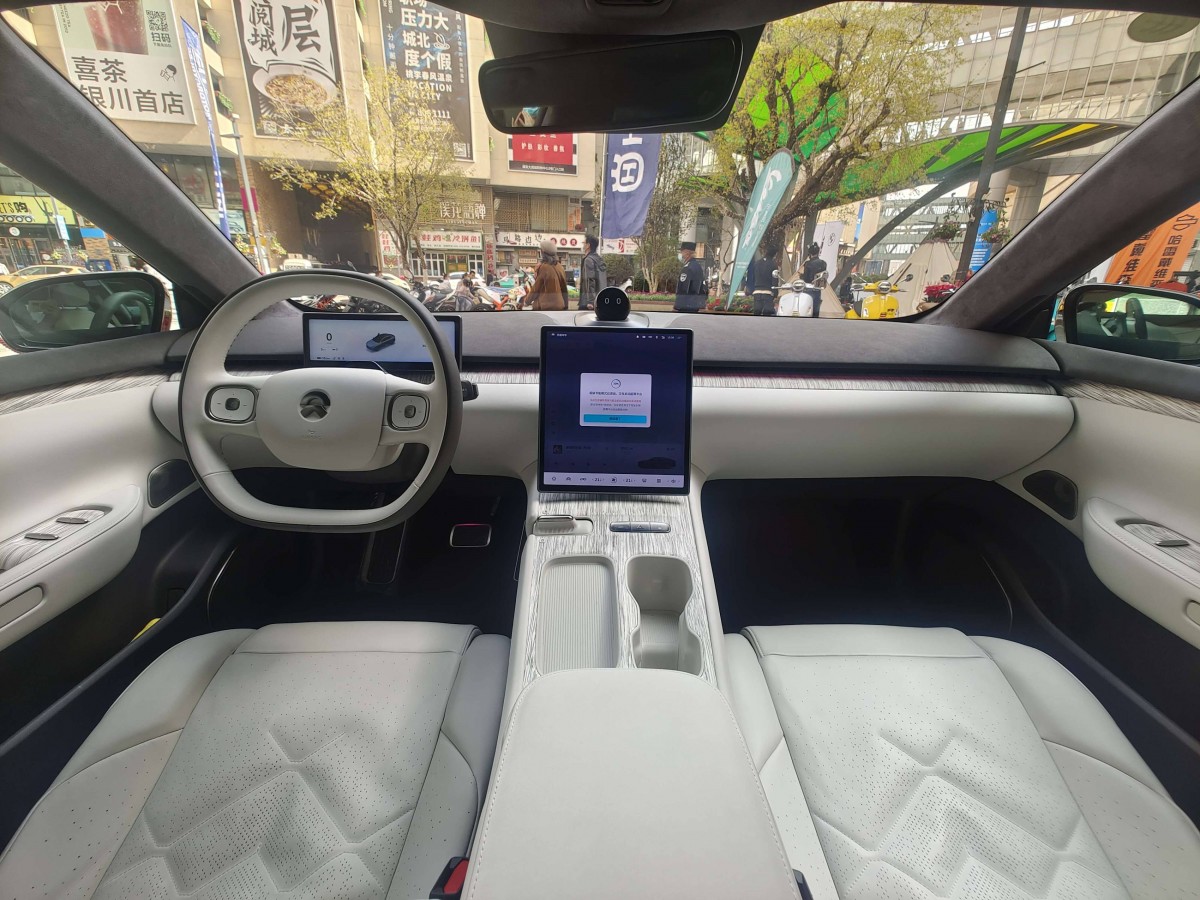 The ET7 uses a lot of Nappa leather and nearly everything is soft and feels excellent, NIO apparently uses up to 40% more leather than other carmakers and we’re not sure on that number but there does seem to be a lot of it. The ET7 is the first to use in a car as a material called karuun, which is entirely made from rattan. Rattan is a renewable plant-based material that helps with the conservation of tropical rainforests. The karuun is used on 14 pieces in the cabin and it has a lovely feel, it definitely raises the level of quality of the ET7’s interior, easily matching those found in premium car brands. ET7 also comes with fragrance and air quality systems (PM2.5 filters) which make the cabin’s air feel fresh and clean. 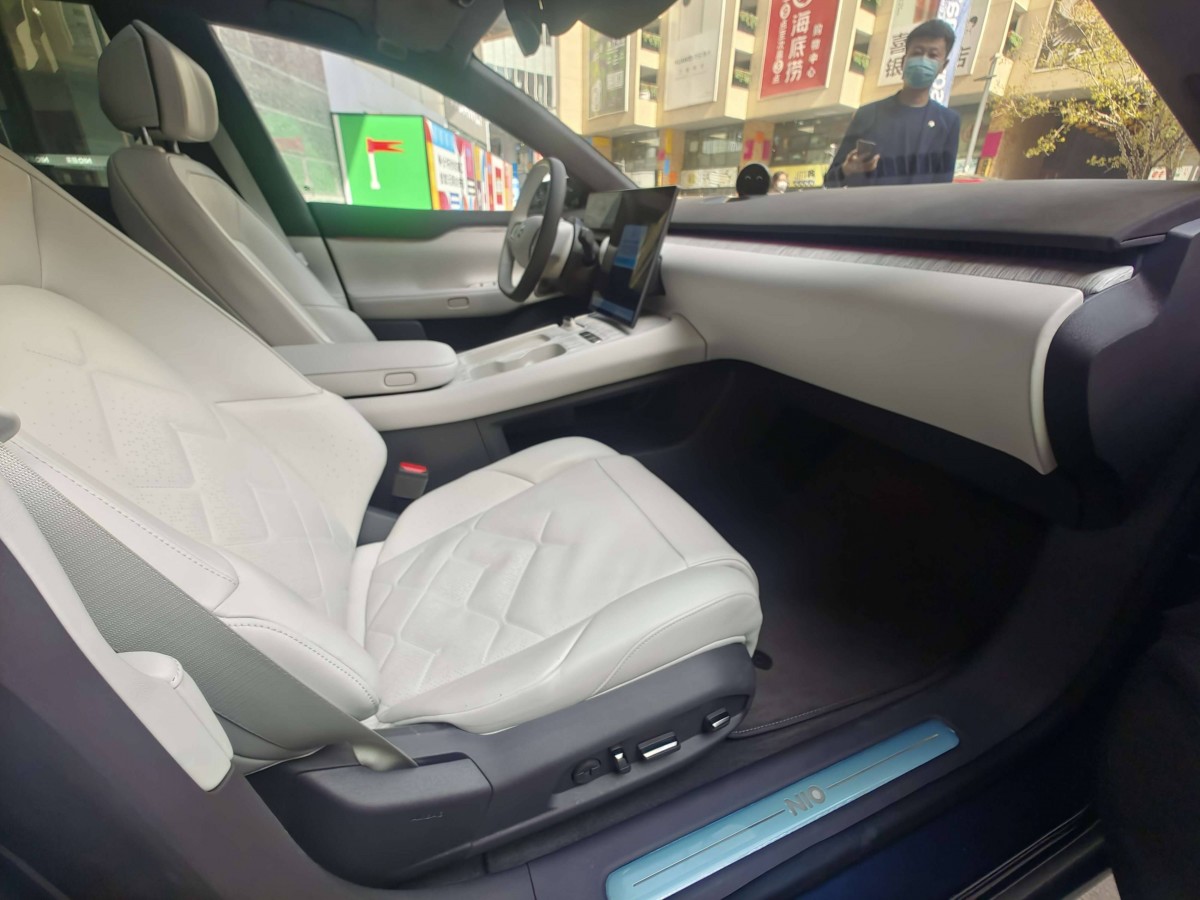 The dimensions make the ET7 very spacious and with a wheelbase of 3,060mm the rear seats are definitely comfy, with plenty of legroom. The width of this car also helps the rear seats to accommodate 3 adults with no trouble at all, we felt that the seats had a great depth and gave good support to our upper legs. 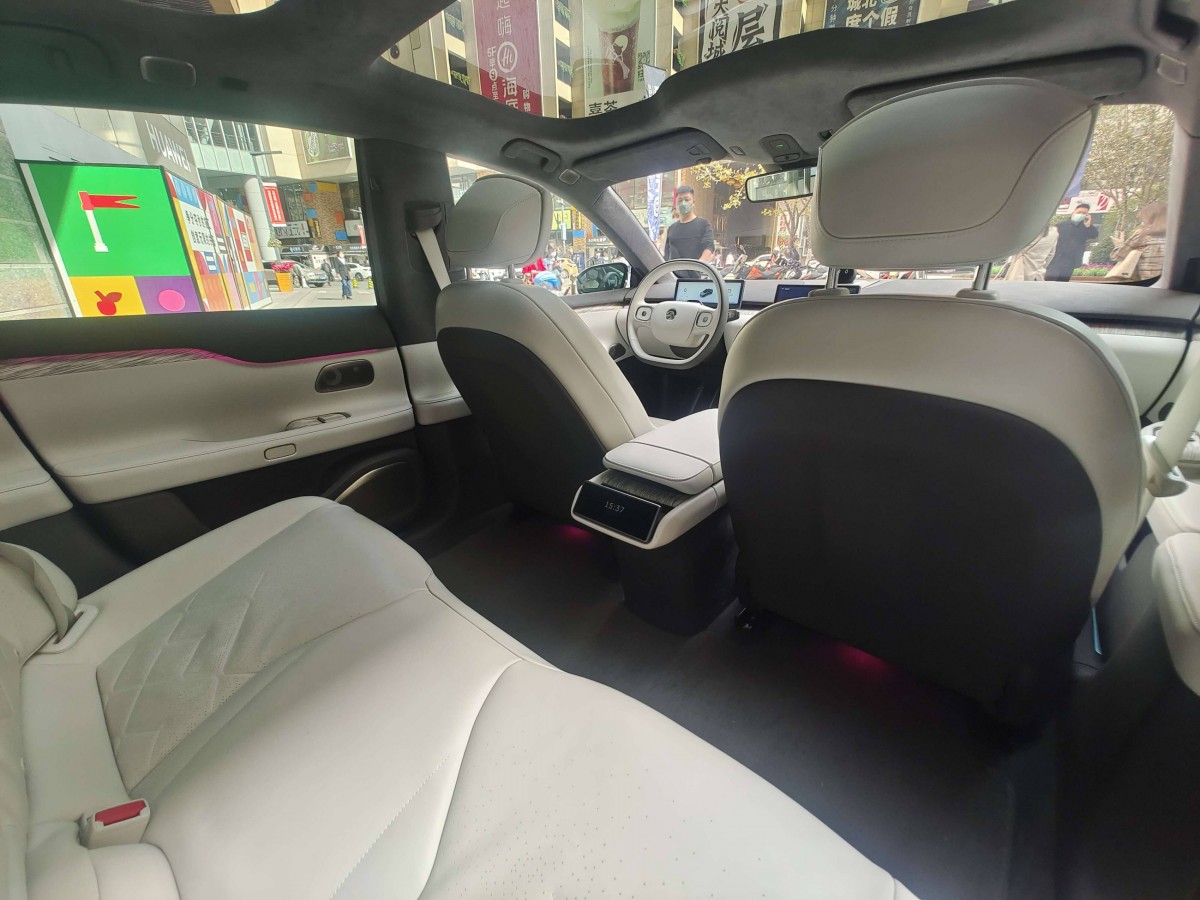 The leather-clad seats were soft yet firm, and it didn’t feel like we were going to sink into them. An awesome bonus is that all front and rear seats have heating, air cooling, and massage functions as standard! Something you’d have to pay an arm and leg for when buying a car from other brands. 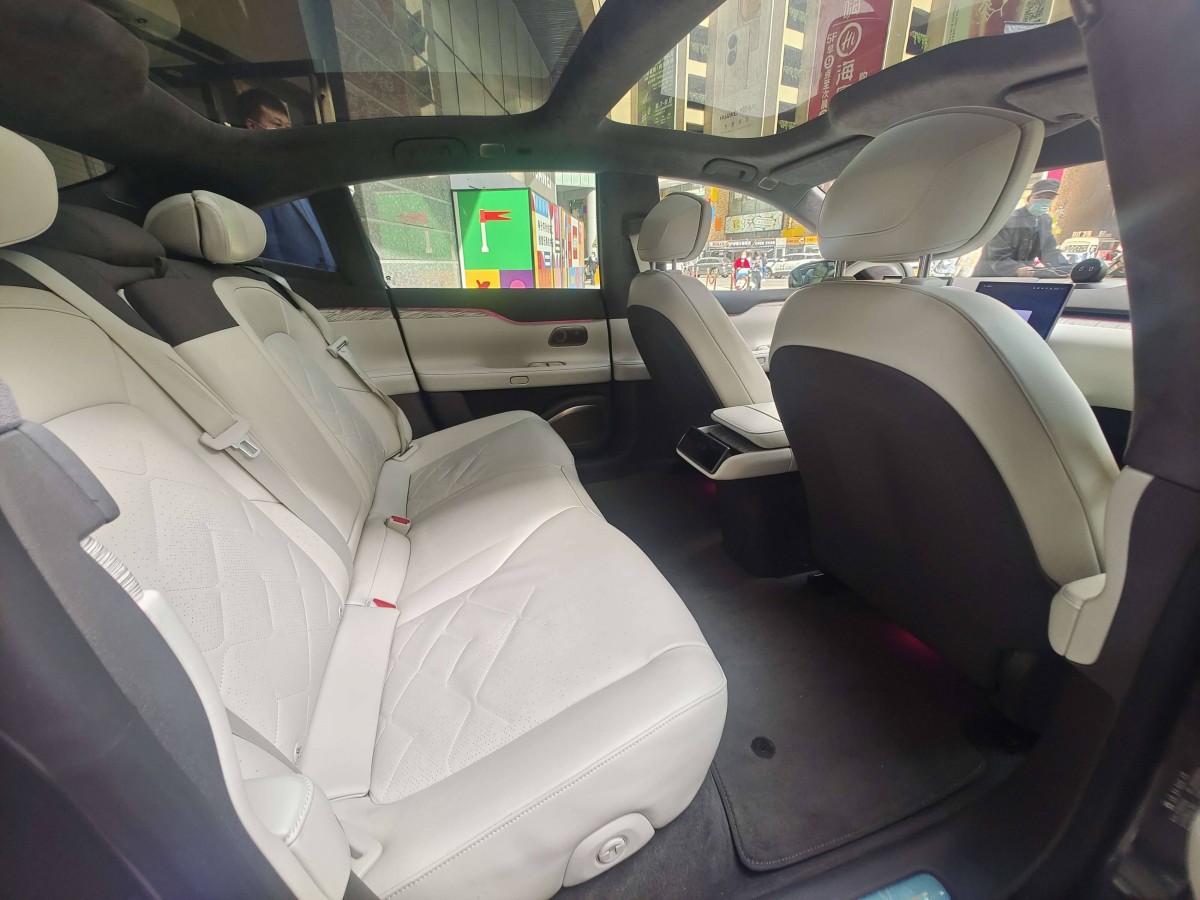 The boot is a great size and can fit everything you need for a family, however, the opening is not that large and the rear seats do not fold down which makes transporting large objects impossible. Now for the technological side of the cabin which is also very sophisticated. NIO is well-known for NOMI, a little robot-like digital assistant that interacts with everyone in the car. NOMI has been upgraded with a dedicated NPU chip and 4 microphone arrays and this allows NOMI to have much better voice recognition and also more accurate sound localization. 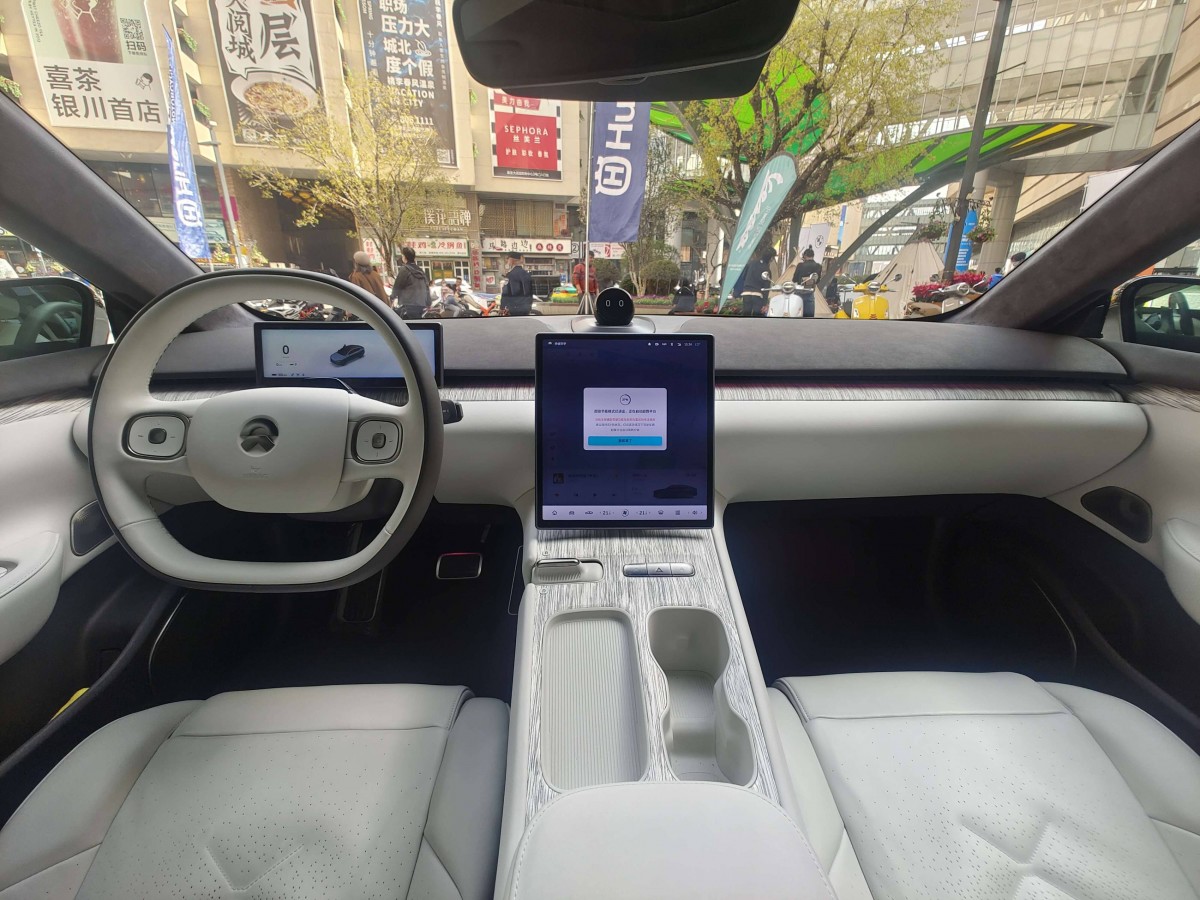 The ET7 comes with the 2nd generation digital cockpit and features a 12.8-inch AMOLED central infotainment screen and a 10.2-inch HDR digital instrument cluster. The floating central screen has a slim bezel design with edges as thin as 5.5mm and has a resolution of 1,728x1,888. The screen looks very sharp and has very impressive colors with details compared to a lot of other infotainment systems. It is also very snappy and responsive with virtually no lag. We were told that the floating design will allow for easy physical upgrades to the infotainment which is a great thing.

Sound on the ET7 is no slouch either with a 7.1.4 sound system as standard, 23 speakers, 1000W power output, and Dolby Atmos - listening to music of all genres is a treat to your ears.

Since we were test driving a pre-release model, the software did have some bugs and this caused us to realize the importance of having physical buttons. On two occasions the whole car system was just stuck and we couldn’t change drive modes nor anything on the infotainment screen. We had to “reset” the car and then everything was okay, needless to say, the staff at NIO assured us these issues will be ironed out in the release software when the ET7 starts shipping.

The NIO ET7 comes in just one electric motor configuration with the battery being the only customizable thing (75kWh/100kWh initially and a 150kWh battery to be released in late 2022/early 2023).

It is the first model by NIO to use the second-generation high-efficiency electric drive platform. This dual-motor electric system consists of a 180kW front permanent magnet synchronous motor and a 300kW rear induction asynchronous motor, creating a peak power output of 480kW and 850Nm of torque. This gives the ET7 a whopping 0-100km/h time of only 3.9 seconds, on par with an Aston-Martin DB11 V12 Twin Turbo. However, in the EV world, it is not as fast as the likes of the Model 3 Performance model (3.3 seconds) or the Model S Plaid which is closer to its size, but then not many EVs can match the S Plaid in acceleration. The ranges are quoted as follows: 530km for the 75kWh battery pack and 675km for the 100kWh battery pack using the CLTC, which is a new, China-only standard for EV range and is even more optimistic than the already over-exaggerated NEDC ranges. The 150kWh battery pack will be the first solid-state battery and is claimed to hold an NEDC range of 1,000km.

We test drove the ET7 100kWh pre-production Premium Edition model. The car offers 5 drive modes: eco, comfort, sport, sport+, and also a custom drive mode. Sport+ is where you can get your 3.9-second acceleration although it may be a bit too much for commuting around the city. The acceleration times for the other modes are as follows: eco - 9.9s, comfort - 7.9s, and sport mode - 5.9s. In eco and comfort mode, the ET7 seems to prefer to use the weaker front motor to power the car instead of the rear one which feels odd, however, this reduces energy consumption.

The regenerative braking in the NIO is not as strong as in other EVs, with the top strength setting being called “Standard”. When taking your foot off the accelerator, the ET7 doesn’t decelerate suddenly and is a smoother experience than other EVs. This is undoubtedly designed to increase comfort for the passengers, as some regenerative braking in other EVs can be too strong and disorientating for some. However, one-pedal driving is not possible in the ET7 as the speed will never go below 8km/h so the brakes will have to be used when stopping in traffic.

The braking is responsive and stable, with it feeling heavier at higher speeds and lighter at lower speeds. This is due to NIO using an electric brake booster system which means that the brake booster motor can output the same torque to brake or decelerate. In terms of suspension, in addition to the air suspension which can raise or lower the car by 5cm, the ET7 also has front five-link and rear multi-link independent suspension and Continuous Damping Control (CDC) system to adjust damping in real-time. Drivers can pre-set the damping to soft, medium, or hard. Out of all driving modes, we preferred the sport mode, which we considered more responsive than the comfort and eco mode without being overly eager. If we were taking the family out on a trip though, then comfort would be the better choice as the ET7 comes with air suspension which raises itself during comfort mode. The road vibrations felt in comfort mode were significantly lower than those in sport mode and the ride comfort/quality was also higher than in sport and sport+ mode.

Outside noise is controlled superbly, from the moment you enter the car and drive it at speeds slower than 100km/h, there is not much wind, road, or tire noise. Coupled with the amazing sound system mentioned above, ET7 feels very calm when driving, like you are in your own bubble with only you and your music surrounding you. As we were testing the pre-production model, we did not have the chance to try out the new NIO NAD (NIO Autonomous Driving) technology based on the Aquila Super Sensing system and NIO Adam.

The Aquila system can generate up to 8GB of data per second and is made up of 33 high-performance sensing units; 11 8MP cameras, 1 ultra-long-range high-resolution LiDAR, and 5 mmWave radars, 12 ultrasonic sensors, 2 high-precision positioning units, V2X and ADMS. The NIO Adam supercomputer is one of the most powerful systems to run in a car. With 4 Nvidia Orin processors, it has a total computing power of over 1,000 TOPS of performance. The ET7’s autonomous driving ability is nothing to scoff at and once fully released it will definitely be able to hold its own against the likes of Tesla’s Autopilot and Xpeng’s ADAS.

The NIO ET7 is a wonderful and luxurious EV that ticks a lot of right boxes: comfort, space, and future-proofing. With electric soft-close doors, air suspension, 7.1.4 sound system, and seats with every function you’d need as standard in the base model - the price is pretty unbelievable. Build quality and ride quality are top-notch and we’d compare the ET7 to the likes of the Model S or BMW i4.

The ET7 is sure to be a good seller in its home market, but we will see how it performs in the overseas markets, once it gets released.

Too many Chinese brands even on EVs are popping like a mushroom. I can feel the same vibe with the likes of redmi, xiaomi, honor, zte etc. in the field of mobile phones.

Can I get a discount if I don't want all the self-driving bullcrap? Can't wait to see the first range tests of the 150kWh version, if it happens.