Rather than focusing on delays and talking about how many years it took Tesla to actually deliver the Semi to its first customer - let’s just talk about the truck itself and what it really can do for the industry. Elon Musk claimed last night that Semi will revolutionize the roads - is this yet another hyperbole from Elon or is he actually onto something?

The truck itself had no more secrets left to reveal, we have seen it in detail already. We know it did finally complete a 500-mile test drive (800 km) and now there is video of that test.

No tricks, no gimmicks - a Semi with a loaded trailer went all the way from Fremont to San Diego, from the sea-level up to 4,136 ft above it, and then back down again. When it arrived at its destination, it had 20 miles of range left in the battery pack. 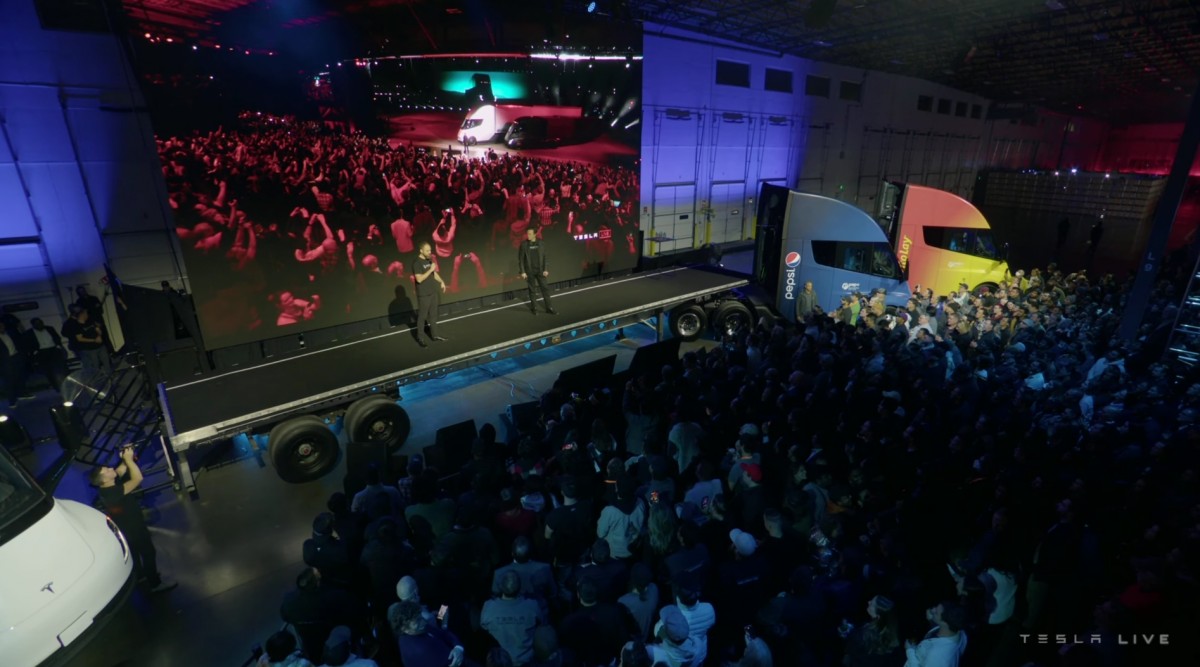 That test alone just shows what size of a gap there is between Tesla and the other truck manufacturers. This isn’t a 100-mile or 200-mile truck. This is what the industry was asking for - a whole shift class 8 truck that can haul a full allowance of 82,000 lbs. That last bit is still ambiguous since Tesla hasn't revealed the weight of the tractor unit, but it won’t be able to hide that for much longer. 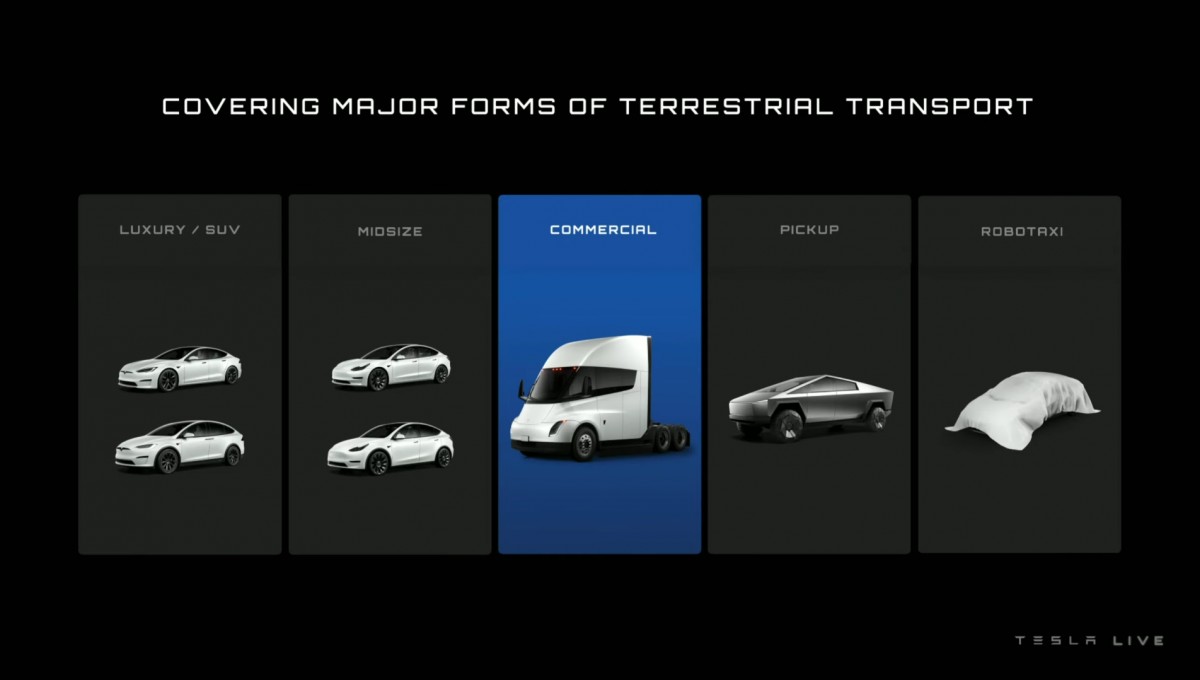 The power comes for three electric motors, the same ones Tesla uses in the Model S Plaid. Tesla wouldn’t disclose the actual power figures, but we can safely expect the Semi to be the most powerful class 8 on the road. The same goes for the torque, in the Plaid models that figure stands at 1,200 Nm (885 lb-ft) which may be enough to pulverize your kidneys in the Model S but it wouldn’t make the Semi twitch and so Tesla have fitted gears to multiply the wheel torque.

The clever and efficient bit is that the two electric motors mounted to the most-rear axle can fully disconnect from it and are only used for acceleration or deceleration and in situations where more power is needed. At steady highway speed only one motor is used and it is powering the middle axle - one electric motor the size of a football is hauling 82,000 lbs down the highway. 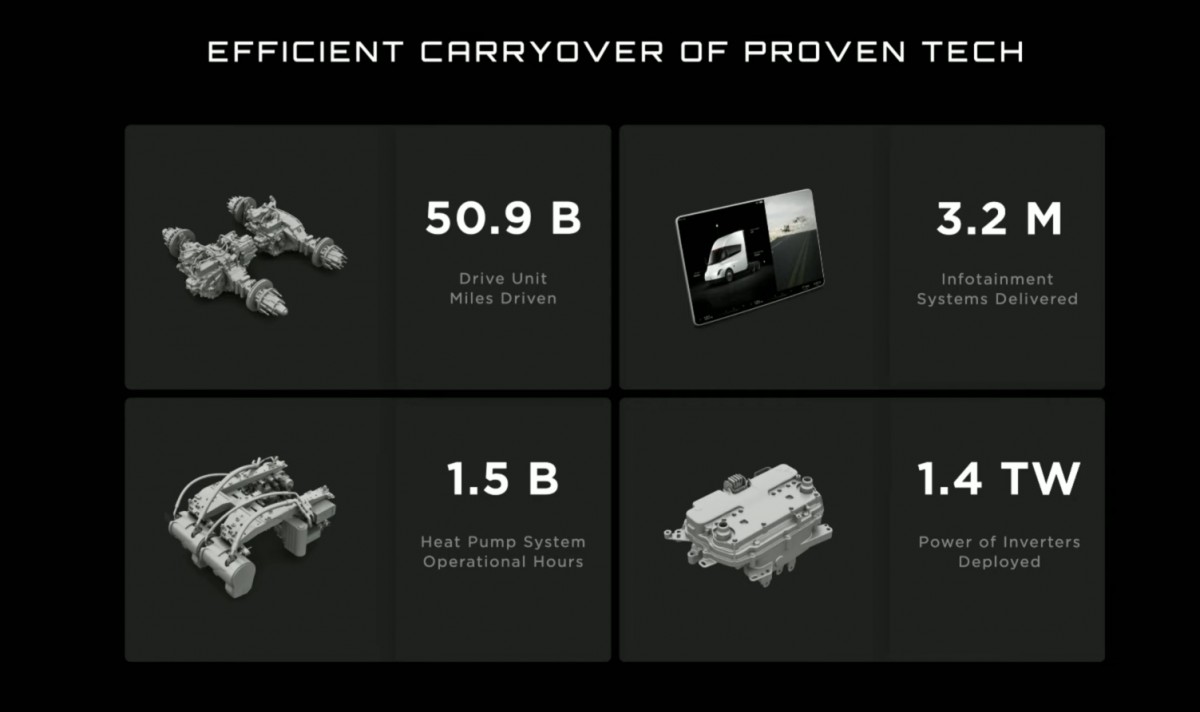 The battery size is no longer a mystery, we’ve known for a while it has to be around 1,000 kWh and with the trucks official energy efficiency revealed as just under 2 kWh per mile, and range of around 520 miles we are looking at 10 battery packs from Tesla Model X needed to power one Semi.

According to the EPA, the 100 kWh battery from Model X LR+ weighs 625 kg which puts the Semi’s battery pack at around 6,250 kg or nearly 13,780 lbs. This will have an impact on the total load capacity of the truck. 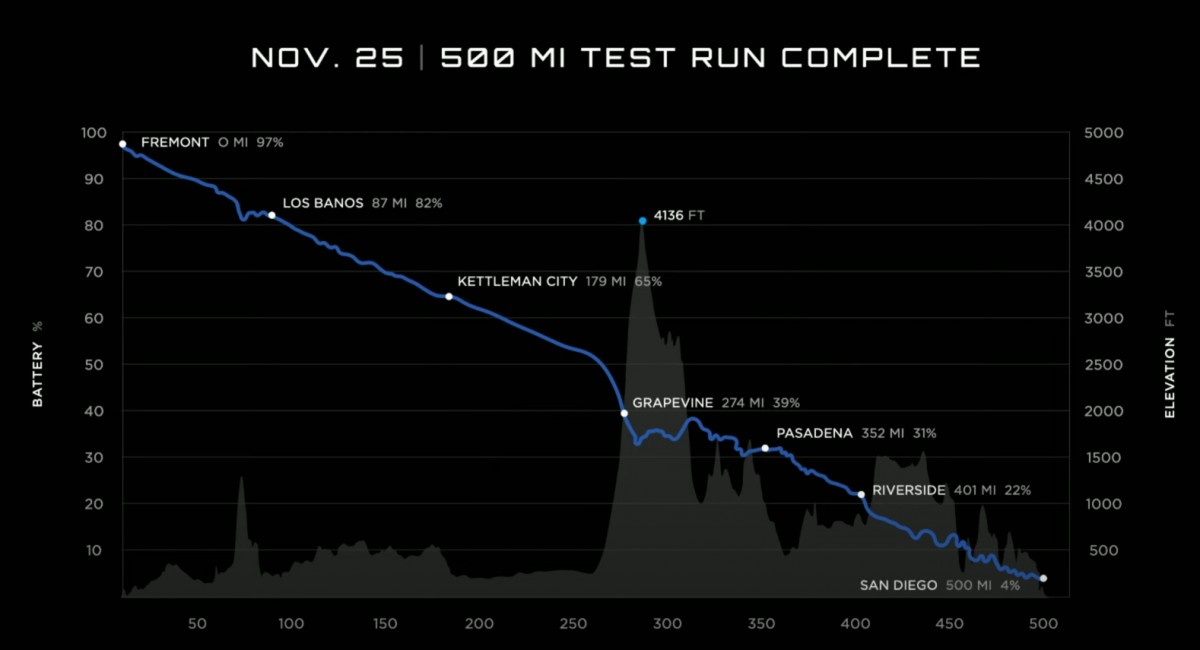 Yes, Tesla Semi is ridiculously fast, it has tons of torque and without the trailer it’ll smoke all the 6 rear tires. But the true difference was shown in a short video clip - the Semi was pulling a full load up the 6 degree gradient and not only overtaking all the other trucks, but still effortlessly accelerating. This will take some getting used to.

Then there is the fact that with three electric motors the recuperation is so strong that going down the hills requires minimal use of brakes and apparently during testing, Semi would get to the bottom of the gradient with its brakes still cold. This is unheard of, it will make a huge difference to safety and the trucker’s worst fear of brake failure may be a thing of the past. 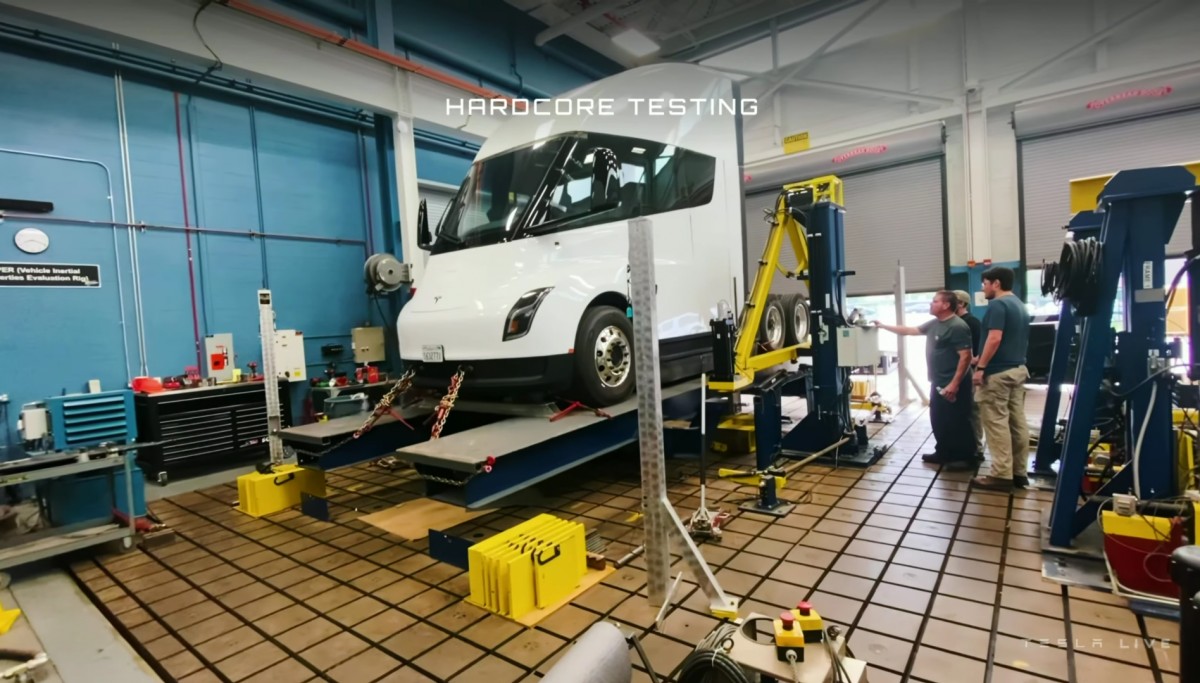 Finally - the cabin. We have seen images before but one detail to be realized, needed an actual driver to sit behind the wheel. Only then it became apparent how low the edge of the windscreen is - the front window starts below the driver’s knees.

In the traditional class 8 trucks it starts chest-level, sometimes higher, then there is a long hood making the forward visibility a very well known issue. No more - in the Tesla Semi driver can see clearly all the way to the front, they can clearly see where the bumper ends and everything else in the front of it. 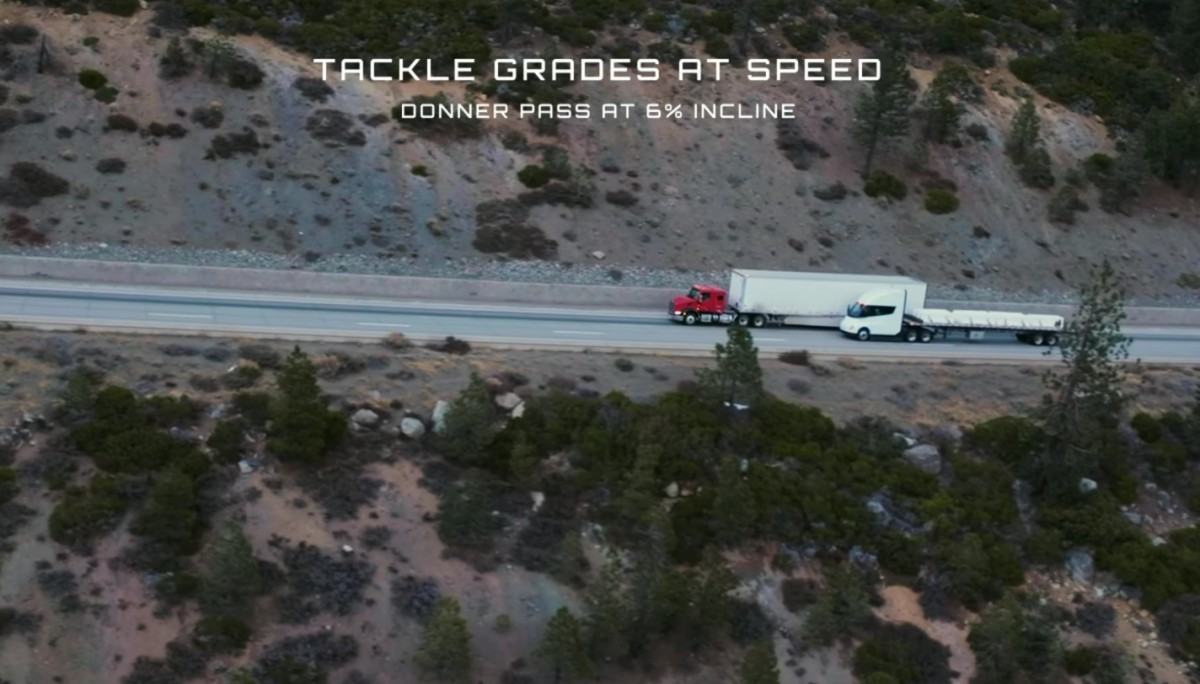 The Tesla Semi will support the latest super-fast charging at speeds of up to 1MW. Tesla presented its new liquid-cooled charging cables with more high-voltage conductors.

We have barely just scratched the surface of the Tesla Semi. We can expect some videos in the near future and there will be detailed reviews popping up on YouTube. It is great the truck is finally here, there is no doubt it will make a difference to the hauling industry. 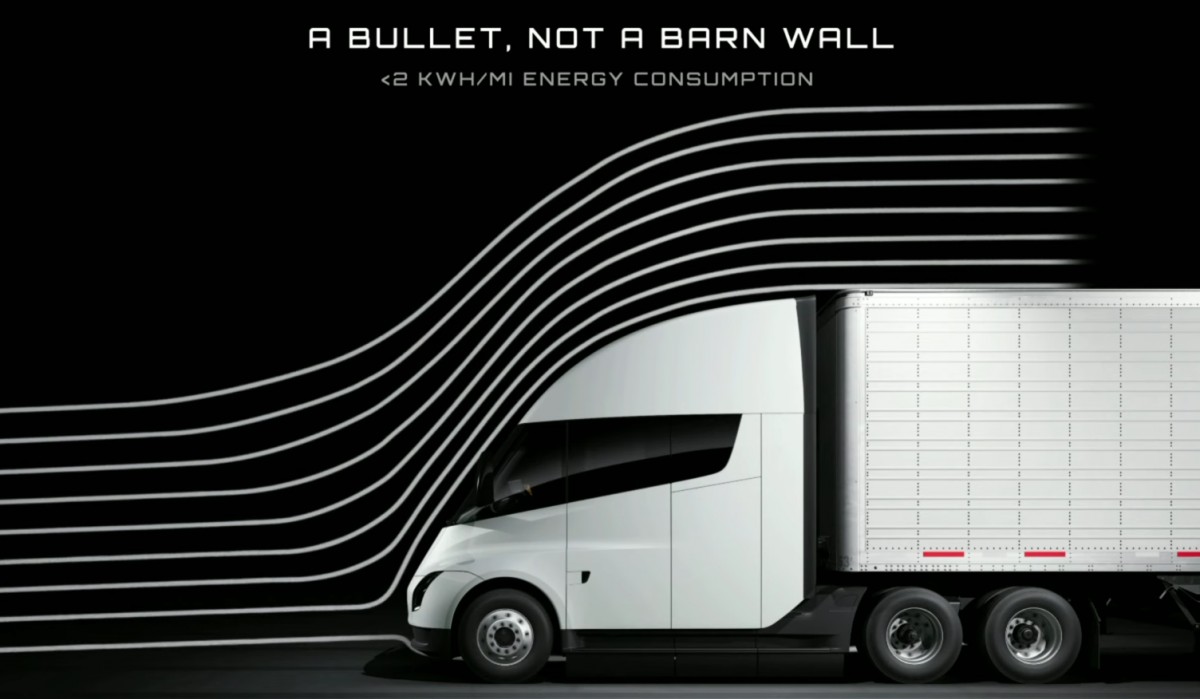 How big that difference is will depend on how fast Tesla can manufacture the Semis and what is the final price of the truck - another piece of the puzzle that the company decided to omit from the presentation.

Suprised they took Tesla delivery,those companies if they want to survive in modern times need to incorporate cancel culture

Why the negative headline?