The importance of SEMA wasn’t lost on EV manufacturers, although the European team hasn’t really brought its strongest game. It is the Americans who understand that a show like SEMA can mean extra sales for years to come if the customers like what they see. 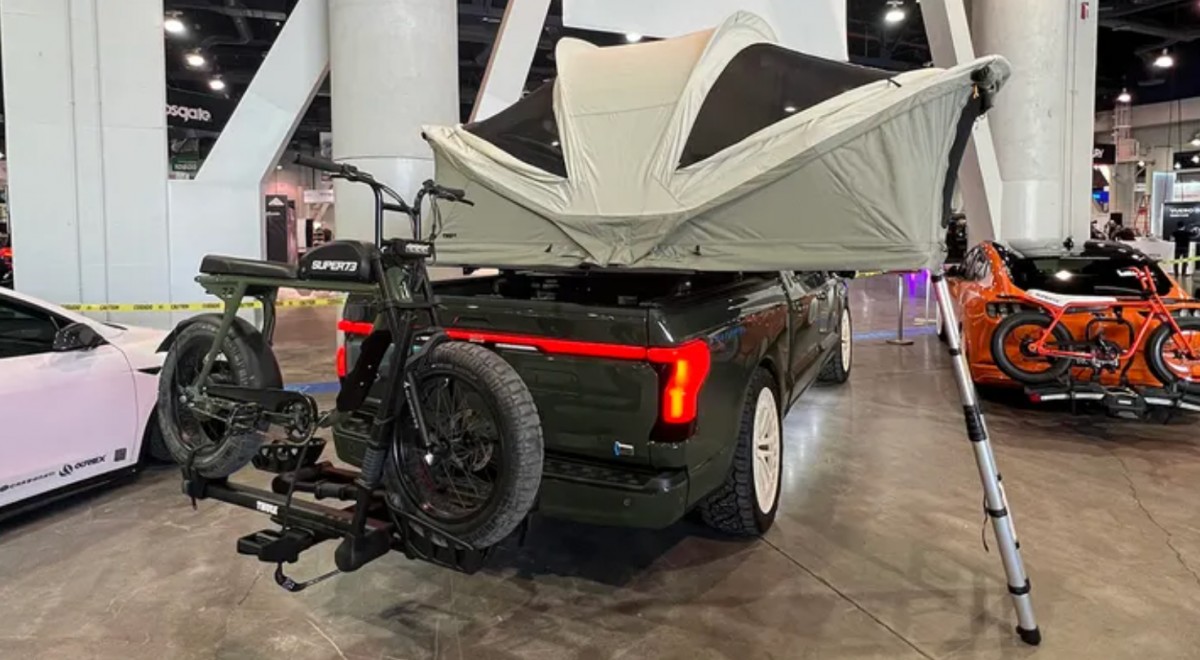 Starting with the Ford F-150 Lightning, the company brought two trucks to represent the electric revolution. First is the Tjin Edition and Thule project in a most unusual color combo - gloss army green with pale cream wheels (Desert Storm Yellow?) with a matching rooftop box. 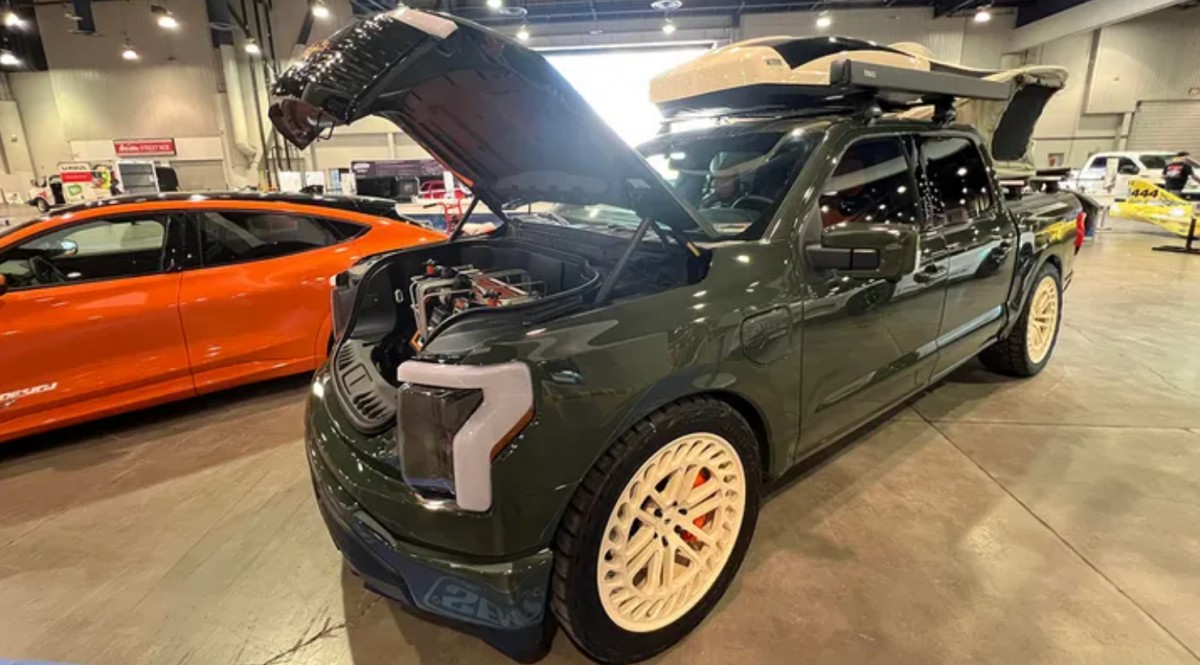 The F-150 is lowered and has the biggest brake kit ever fitted to a truck, the wheels are neatly tucked in into the wheel arches. The side logos and the front Lightning name all light-up to add drama to the exterior - as if the wheels and color combo weren’t enough.

The interior comes with five individual bucket seats in contrasting yellow and black leather, there is a fold-out tent at the back and there are two electric Super73 e-bikes mounted at the rear. Thanks to the modified air suspension, the truck now has a fully blown air compressor stowed in the frunk. Amazing build from a California based tuner. 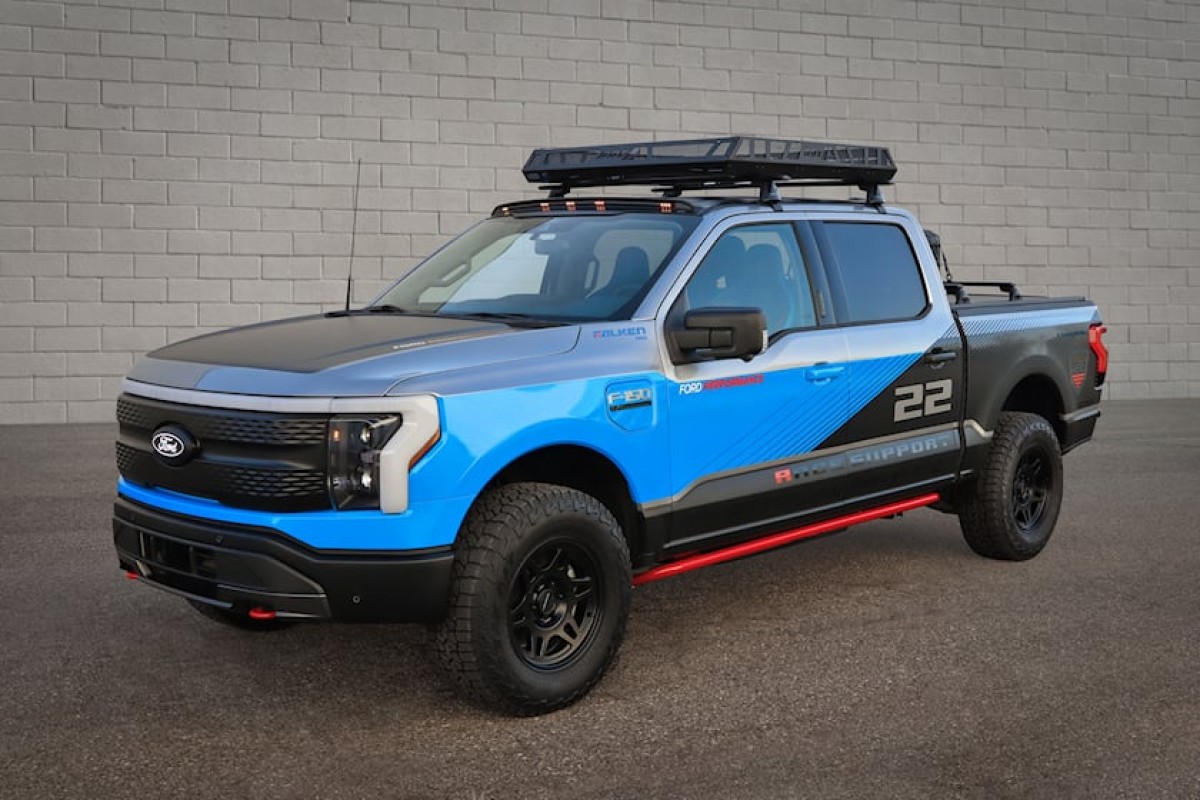 The second F-150 Lightning is meant to offer support for off-road races such as Baja 1000. The truck is built by Real Truck and Motor City Solutions and comes with air compressor, leveling kit and off-road recovery boards. The interior comes with Recaro seats and there is a fully equipped mobile tool box together with welding equipment. 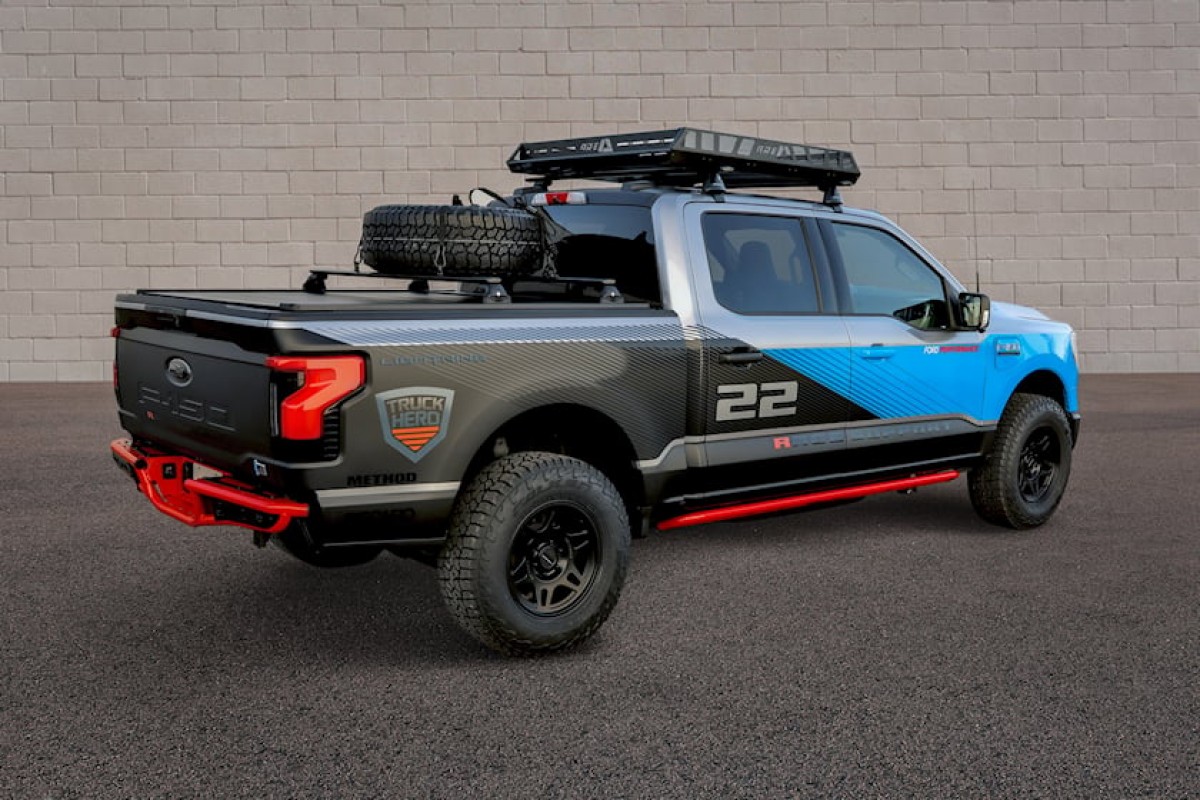 Wheels and tyres combo together with raised suspension are there to ensure the truck can provide assistance in any road conditions, the custom wrap rounds of this project nicely.

It wouldn’t be a SEMA show without a Mustang or two. Ford made sure that the Mustang Mach-E is represented properly and worked with Dom Tucci Design for this one-off Satin Brown creation. The suspension is lowered so much the car no longer looks like a crossover, with the wider track and 3D-printed fender flares, this Mach-E looks like a proper racing hatchback. 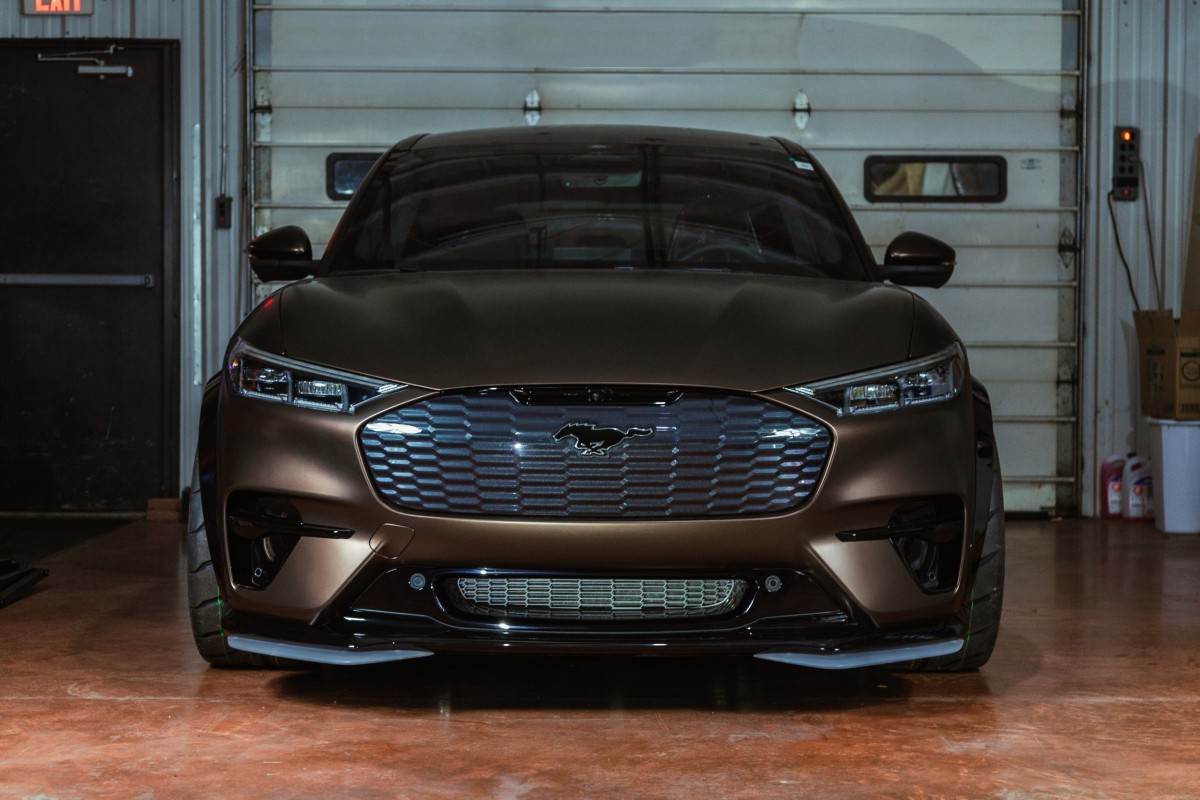 The front splitter adds to the drama and the added rear wing sitting atop the rear spoiler sums this project up. White racing wheels with track-ready tires, Recaro carbon buckets inside with 5-point harnesses and a horizontal bar between the B-posts mean business. The unusual color comes courtesy of Wayne Design & Sign - it is Matte Java Brown wrap. What a car this is - it looks mean and in the GT trim it could properly handle any race track thanks to the upgraded suspension. 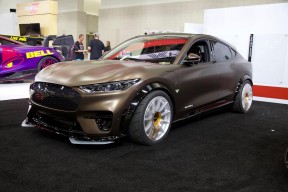 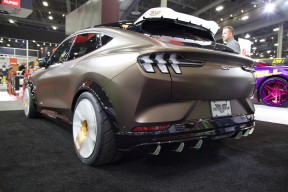 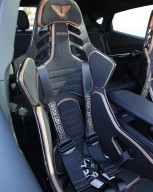 The other Mustang Mach-E is a completely different kind of pony. This one has been brought to the show by Borla Exhaust to showcase the company’s latest venture into the electric car soundtrack. The idea came from Shelby who wanted amplified sounds for its Mach-E versions. The whole system is fairly simple - a speaker is wired to a controller which in turn is operated by an app. 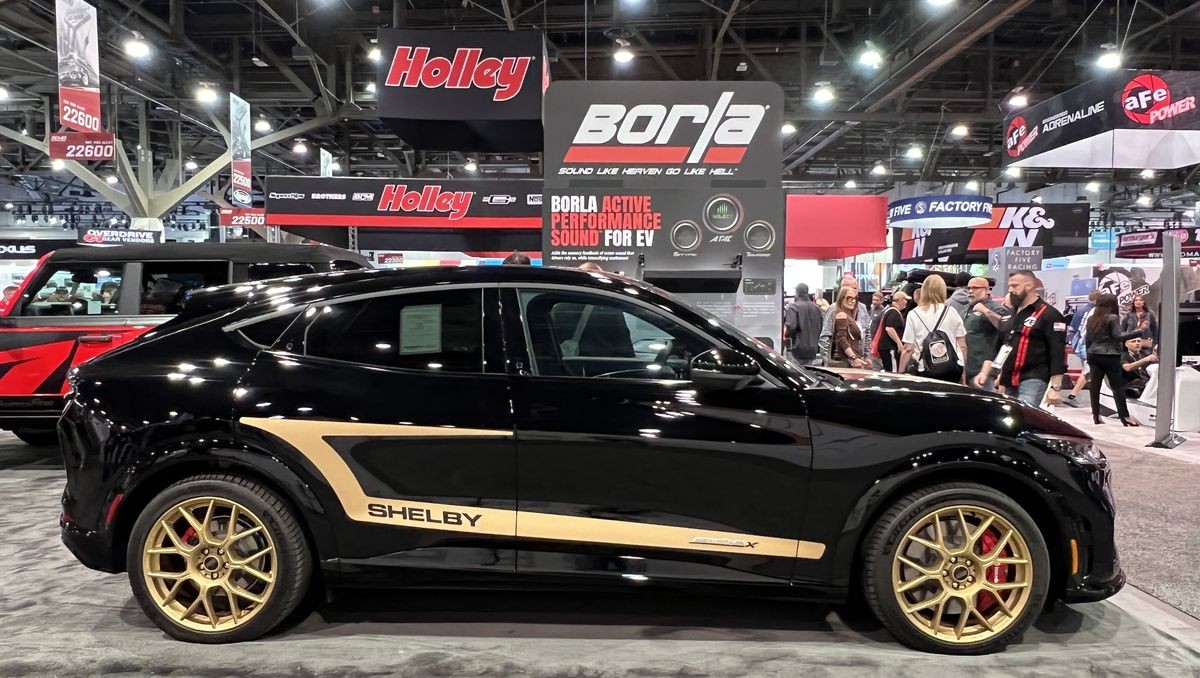 The car itself has modified wheels and brakes, it has full length golden stripes and Shelby graphics on the sides. Installation of the speaker takes about an hour and the sounds it makes are fully customizable. Initially there are GT500, Camaro and C8 Corvette exhaust notes available but more is coming.

Apart from the iconic gas-powered sounds, Borla is working on original EV content, the company wants the electric cars to have their own unique voice and not necessarily pretend they are something else. It may sound like a daft idea but the market for it is serious and many companies are taking it seriously and backing it up with huge budgets.